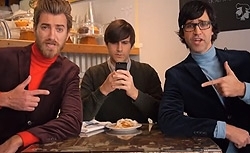 You might say the point, to use as much jargon as humanly possible for a feelgood Christmas story, is to turn FOMO (fear of missing out) to JOMO (joy of missing out) for a little while, anyway.

The campaign -- or maybe un-campaign should be the term -- via DigitasLBi will put "See you on the 26th" on the automaker's Facebook cover and “out of office” tweet on Twitter, and the other sites.

The campaign also involves a "Manners Memes" element through the end of the year with messages exhorting people to get offline: “More Gram. Less Insta,” “No Selfies Under The Mistletoe,” for example.

And there's a "Get off the Phone" song and video on YouTube via a collaboration with Rhett & Link carrying the #InTheMoment message. That debuted a couple of weeks ago, and GM said it has gotten over a million views. And there's a sponsored partnership with BuzzFeed including lists like 12 gifs that will make you get off the phone.

The campaign is totally digital, with a big part of it on BuzzFeed. Jonathan Perelman, BuzzFeed's VP of agency strategy and industry development, says working with someone like Buick -- which might on the surface seem like the wrong brand for BuzzFeed's audience -- works because good content finds its audience.

"It's really a halo for the brand through telling the story. They came to us to reach a different audience, a little bit younger, to amplify this message of 'friendly luxury’ that can resonate with Millennials and Gen X."

Perelman, who is a senior fellow at the Center for the Digital Future at the University of Southern California’s Annenberg School, says that, yes, the onerous fact that 80% of younger people sleep with their phones on their night tables is lower, but it's lower because they have now turned their smartphones into digital teddy bears. "People realize there's a world to live in that doesn't involve having your head stuck in front of a screen. That's what Buick is trying to say. Life is about experiences, not just about checking your Twitter feed."

Lifestyle as a sort of communal, un-ostentatious luxury experience has been central to Buick's brand identity strategy for years, as it tries to connect with its “car of the neighborhood doctor” equity. Every year, the automaker hits the road with epicurean-focused lifestyle programs as it tries to forge a realistic place for itself in that amorphous asteroid belt between mass and luxury -- a place every brand is banging around to some extent, trying to find some space upmarket.