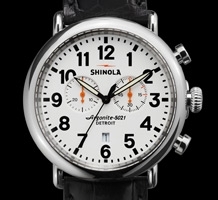 Watches, leather goods, journals, bicycles, cola, shoe polish, bike locks encased in leather. One brand has its name on products in all of these categories, and it’s not a licensing deal, either. But if you don’t know "sh%t from Shinola," don’t feel too bad. The brand is over 100 years old, but was resurrected only a couple of years ago.

If you do know the Shinola brand, it’s probably because you’ve heard about its Detroit-made watches, which are assembled in a 30,000-square-foot space rented from the College for Creative Studies in  the resurrected Argonaut building. But Shinola will, if things go as planned, become much better known next year as it expands both its product line, retail footprint, and marketing efforts worldwide.

The company, a unit of Plano, Texas-based Bedrock Brands, currently has stores in Detroit and New York's Tribeca district, and plans three more in the U.S. — Washington, D.C., Minneapolis and Chicago — and one each in London and Berlin, per Stephen Bock, Shinola’s CEO. Currently, the brand’s European outlet is Collette in Paris, and it also has a presence in Singapore through Robinsons. Bock tells Marketing Daily the company also has distribution deals in the U.S. through Nieman Marcus, Saks, Nordstrom and Barneys.

The company launched the watch line in March this year with a social media campaign offering the initial batch of 2,500 Runwell watches sight unseen. They sold out in days. Then came full-page ads in The New York Times,Detroit Free Press, USA Today, and the Wall Street Journal. A U.S. ad campaign is on deck for Spring, and European advertising is also planned for next year, says Bock. Shinola has also gotten some promotional mileage from Ford Motor, which tapped the company to produce 1,000 Ford Mustang-branded watches to celebrate that icon's 50th anniversary.

Parent company Bedrock, owned by Tom Kartsotis, former head of Fossil watches, has also worked to grow the brand's product line into what looks at first glance to be a haphazard profusion of American-made things as disparate as Shinola Cola, the aforementioned leather-swathed bicycle locks, and, soon, a line of Shinola jeans. The core line of products, the watches, which start at around $500, get their movement from Ronda AG, a stakeholder. "Through that partnership and re-establishing this capability in Detroit, we can drive business in a very succinct way," says Bock.

Bock says that no small part of the brand's success is its identification with Detroit, which to a large extent is evinced by the retro, blue-collar product design. "We have had huge success in Washington, D.C., Chicago, Seattle, New York, across the board. It really appeals to someone looking for a product watch that carries this idea of Detroit innovation, and creativity. It's an iconic city, a global city, with music, automotive, design creativity."

The company is mining the association with American heritage with other products, most recently a limited-edition, retrospective Wright Brothers bicycle series made, per Bock, by the scions of the two bike-building brothers, and with another bike designed by members of the original Schwinn family.

Says Bock of the brand. "It's Detroit design heritage, modern value and quality. It's an industry that has been absent from the U.S. for 40 or 50 years."