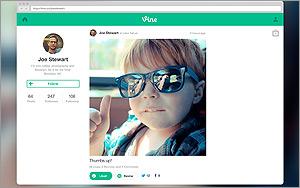 Vine, whose mobile app made six-second videos a sensation, is heading to the Web. Users can now log in at Vine.co to view their home feed, and like, comment and share videos as they would in the app, the company said on Friday.

People will also be able to see profiles of favorite Vine users and browse videos they have created since signing up for the service. Users can share their accounts so other people can see their posts.

Vine launched exclusively as an iOS app only a year ago, before expanding later in the year to the Android and Windows platforms. Eventually, it racked up more than 40 million registered users.

The move to the Web mirrors the same step Instagram took in late 2012, extending its photo-sharing service to the Web after initially gaining widespread popularity as an app. If the growth of Instagram.com is any guide, Vine.co could build a large audience online as well. As of November, Instagram.com attracted 64 million monthly visitors in the U.S. across the desktop and mobile devices, according to comScore.

Of that total, about 40 million were coming from phones and tablets; the balance is from PCs.

Adding a new wrinkle tailored to desktop and laptop screens, Vine has introduced a TV Mode button exclusively for the Web version. The feature enables users to watch video collections in sequence and in full-screen mode. “This release is just a first step toward bringing you a richer, more enjoyable Web experience. We look forward to introducing more improvements in 2014,” stated a Vine blog post.

For brands, the launch of the Web-based version of Vine means a potentially larger canvas for their videos and the prospect for broader reach. But the millions of short, quirky videos it has spawned still seem better suited to the intimacy and immediacy of the mobile format than the desktop. While a larger screen might give an Instagram image more visual impact, it won't make a Vine video any more clever or amusing.

Still, it seems a natural step for Vine to go online, especially to reach more international users who may be more accustomed to using the Web than apps on their mobile devices. Its expansion to the Web comes on the heels of Vine adding the ability for users to reserve vanity URLs for their profiles, taking a page from parent company Twitter.