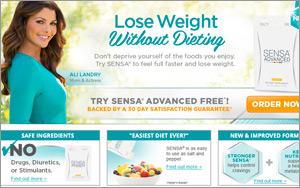 Three weight-loss products marketers have agreed to pay a total of $34 million to settle Federal Trade Commission charges that they engaged in deceptive advertising. The FTC will make the funds available for consumer refunds.

California-based Sensa Products, LLC will pay $26.5 million as a result of its ads claiming that its powdered food additive Sensa enhances food’s smell and taste -- making users feel full faster so they eat less and lose weight without dieting or changing their exercise regimes.

Sensa, which typically costs $59 plus shipping and handling for a one-month supply, has been marketed through TV ads and infomercials, print and radio ads, telemarketing, a promotional book, and through online retailers including Home Shopping Network and ShopNBC and retail chains such as Costco and GNC, according to the FTC. The agency said the Sensa company's U.S. sales totaled more than $364 million between 2008 and 2012.

The FTC's complaint also named CEO Adam Goldenberg, and Sensa creator and endorser and Sensa Products part-owner Dr. Alan Hirsch with making unsubstantiated claims in ads (it charged that two studies conducted by Hirsch were falsely cited in marketing as clinical proof of Sensa's weight-loss claims). The FTC also charged that the defendants failed to disclose that some consumers were compensated for their endorsements with payments of $1,000 or $5,000 and trips to Los Angeles.

The FTC's settlement with a second company, LeanSpa, requires its principal, Boris Mizhen, and three companies he controls, to surrender cash, real estate and personal property totaling approximately $7 million. Mizhen’s wife, Angelina Strano -- charged as a relief defendant who accepted money from the scheme but did not actively participate in it -- will surrender nearly $300,000.

LeanSpa was charged with using fake news sites to promote acai berry and “colon cleanse” weight-loss products, making deceptive weight-loss claims, and telling consumers they could receive free trials of the products by paying the nominal cost of shipping and handling. The FTC alleges that many consumers ended up paying $79.99 for the trial, and for recurring monthly shipments of products that were hard to cancel.

A fourth company, Arizona-based HCG Diet Direct, was ordered to pay $3.2 million, but that fine has been suspended due to the company's inability to pay.

HCG and six other companies that market similar products received warning letters from the FTC in 2011.

The FTC is also taking steps to inform media owners and consumers about deceptive weight-loss ads.

The agency is sending a letter to publishers and broadcasters asking them to cooperate voluntarily with the agency by having their ad sales staffs use the FTC's updated guide for spotting false weight-loss claims in ads, and refusing to run misleading ads.

During its press conference on the settlements, FTC officials said that while the agency has the legal power to prosecute media that run ads with bogus claims, along with the marketers, it has not done so in the past, and does not expect to do so in relation to weight-loss ads going forward.

On the consumer front, the FTC has an area on FTC.gov informing consumers about such false claims.

And in what may be an unusual tactic, the agency has created a "teaser" Web site designed to reach people who are surfing the Web for weight-loss products.

The site appears to offer a weight-loss product dubbed "FatFoe Eggplant Extract" that guarantees fast, easy weight loss with no diet or exercise. But when consumers click to buy it, they get a message from the FTC explaining that FatFoe isn't a real product, and educating them about common false claims for weight-loss products.