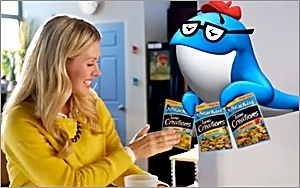 StarKist's Charlie the Tuna is appearing in new TV ads as “a classic hipster with a fresh new look.”

The tuna brand is reintroducing the jive-talking tuna as the starring voice of the "My Lunch. My Way. My Creations." campaign, inviting consumers to add personalized flavor variety to lunch with the brand's seasoned Tuna Creations pouch line.

StarKist enlisted the directorial assistance of animator and visual effects supervisor, Steve "Spaz" Williams, to reintroduce Charlie with modern 3D animation that still harkens back to the classic character that was developed more than 50 years ago.

Since the cartoon character’s debut in 1961, his red hat, glasses and mannerisms have made him a “true pop culture icon,” said Mike Brookhart, Starkist director of marketing.

"The return of Charlie as the 'star' marks an evolution in our brand,” Brookhart said in a release. “We are staying true to the classic StarKist taste consumers know and trust, while highlighting the newest individual flavors of our complete StarKist Tuna Creations product line for delicious, convenient and better-for-you lunch options."

StarKist and its lead agency, Harrisburg, PA based Pavone Inc., teamed up with Buffalo, NY-based animation studio IBC Digital and Cornerstone Pictures to bring the animation to life.

To make an even larger-than-life splash, the brand recruited Williams, the lead graphics animator and visual effects supervisor on famed movies such as "Jurassic Park," "Jumanji," "Terminator 2," and "Return of the Jedi," to direct the final product.

To retain the classic look, tone and personality of the original character, sketches from the very first Charlie the Tuna were studied and used to create the "new" version using 3D animation.

The 15-second and 30-second spots show a contemporary office atmosphere, featuring Charlie providing flavorful salad solutions to make "your lunch, your way" with single-serve Tuna Creations. While the ad has a modern feel, it also evokes a sense of familiar nostalgia with Charlie delivering his iconic catchphrase: "Tell 'em Charlie sent ya!"

Charlie will take a lead role in StarKist's social media presence, hosting a Facebook game, "Charlie's Brain Pleasers.” Through Feb. 3, consumers can “like” StarKist on Facebook to unlock Tuna Creations-inspired mini games for a chance to win a $500 Visa Gift Card each week.

The game will be supported via Facebook “Like” ads, digital display banners and a free-standing insert in Sunday newspapers.