MagicJack Prods Consumers To 'Do The Math' 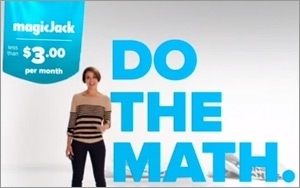 Having built awareness through heavily promotional, “as seen on TV”-type advertising and packaging, magicJack, a maker of an inexpensive Internet voice phone system, is looking to build a brand through a message of savings.

“We’re trying to appeal to a broader customer set. When the product was launched, it was very new, and it was launched as an ‘as seen on TV’ product,” magicJack’s Chief Operating Officer Tim McDonald tells Marketing Daily. “While we have a compelling position and a recognized brand, we’re cleaning up the product and packaging and messaging to make it more simple and more attractive to a broader audience.”

With the tagline “Do The Math,” the new effort touts the company’s inexpensive offering when compared with more traditional telecommunications companies. The campaign includes new television, radio and print advertising, as well as updated packaging and a redesigned Web site, McDonald says.

The effort encourages people to make a few simple calculations when it comes to their telecom bill, and reinforces the message that the third-generation magicJack device can save them hundreds of dollars a year. Through a direct message and graphics, the ad points out that phone companies charge as much as $30/month for their services and Vonage charges $24/month, while magicJack costs only $3/month. “The choice is clear. Do the math,” the spot concludes.

“We think we have the tremendous value proposition for the industry,” McDonald says. “There’s incredible value in the magicJack brand that had been wrapped in complexity, and we’re selling the simplicity of the product.”

The new messaging and look are a result of increased understanding among consumers about how voice-over-Internet-protocol (VoIP) works and consumer concerns about rising telecommunications bills.

“Over the six years from the company’s launch, the voice [over internet] industry has changed pretty significantly,” McDonald says. “In 2007, when the company was launched it was new, and it required that heavy promotional element. Today, the world has changed. People are seeking out value-based options [such as] seeking prepaid solutions.”

In addition to running ads on television, SiriusXM Radio, Pandora and Facebook, the brand will also support the effort through aggressive social media outreach, including introducing the the hashtag “#magicMath” on its social media platforms. The company is also running Spanish-language advertising to tap into the relatively large Hispanic market that has been using the magicJack product, without any significant marketing to them, McDonald says.

“We know that there’s a large number of Hispanics buying our products, yet we’ve never marketed to them,” he says. “For the very first time, we have a Spanish-language site.”