Coke Pre-Releases One Of Its Two Super Bowl Ads 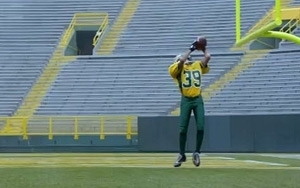 The ad, "Going All the Way," shows an underdog high school football player not only taking control of the ball and scoring a touchdown, but then running all the way to the Green Bay Packers' Lambeau Field to make another "touchdown."

The groundskeeper — the only person in sight in the otherwise-empty stadium — offers the determined teenager a Coke.

The ad, from Wieden+Kennedy, will be aired during the third quarter of the game.

The heartwarming spot represents a very different approach from Coke's last year's "gamified," highly interactive "Mirage" Super Bowl campaign, in which fans voted for teams racing across the desert, and the outcome was revealed in a post-game ad -- although the brand has hinted that this year's second Bowl ad will showcase some social strategies.

Coca-Cola pledged to donate $50,000 to the Boys and Girls Clubs of America once "Going All the Way" reached 10,000 shares online.

After being posted for under 24 hours, the spot had already been viewed nearly 30,000 times on YouTube as of Tuesday afternoon.