Jelli, a programmatic ad platform for the radio industry, on Thursday formally launched its platform for broadcast advertisers, dubbed RadioSpot.

This is where the definition of “programmatic” becomes important. While some associate it with real-time bidding (RTB), “programmatic” is more of an umbrella term for the automation of media-buying. There is no RTB on Jelli’s platform. Instead, the radio ad buys still occur on a direct basis, but much of the process is automated, namely the back-end reporting.

Mike Dougherty, co-founder and CEO of the San Mateo-based company, spoke with RTM Daily about the official launch of the platform. He said the issues the company faces in bringing programmatic technologies to broadcast radio are comparable to the issues online marketers faced in the late '90s, including whether or not an ad is actually delivered.

Citing a combination of Nielsen Audio data, Radio Advertising Bureau data and Jelli’s own estimates, Dougherty said there are 4 trillion broadcast radio spots delivered each year, worth about $16 billion in the U.S. market. While streaming services such as Pandora and Spotify receive a lot of hype, Dougherty argued that the tried and true has not lost its luster.

“Of that $16 billion market, about $1 billion is streaming-related. Of the 4 trillion ads, probably around 300 billion or so are streaming-oriented,” he said. “It’s still early days, and those figures show the potential of some of those services, but it also shows where the scale is now.”

Jelli focuses on national campaigns, and Dougherty said it usually takes 60-90 days for the local networks to let the national advertiser know whether or not their ads were properly delivered.

“In 2014, that’s how it works,” Dougherty jested. “It’s a pretty antiquated and highly logistical process. So we want to confirm the delivery of an ad, and report in real-time that the delivery occurred.” 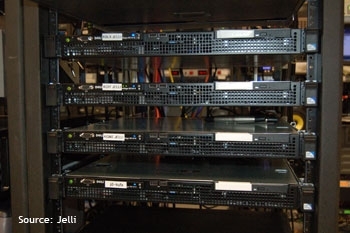 automate when the radio spots air on a national scale. The inset image is of a RadioSpot server at Entercom San Francisco.

Once an ad is delivered, a log is created. Marketers can view that log through a dashboard. Dougherty said it helps prove -- without having to wait two or three months -- that an advertiser’s ad ran on the right station, during the right time of day, etc. He claimed that improper delivery is a problem that impacts “hundreds of billions" of ads per year on broadcast radio stations.

The idea of automating the radio ad-buying and delivering process has caught on. Dougherty said the Jelli network was comprised of 68 local stations a year ago, compared to 350 today -- and that the company is now on pace to serve 4 billion impressions per year, compared to 700 million one year ago. Of note are Jelli’s partnerships with Entercom and Townsquare Media, two of the largest radio groups in the country.

While Dougherty said Jelli is focused on using automation to help with the delivery, reporting and general accountability of radio advertising, he hinted that a more real-time approach to buying could be in store as early as 2014.