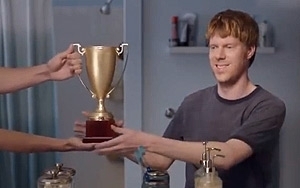 U.S. Bank is encouraging customers to save via an ad campaign promoting START - Savings Today And Rewards Tomorrow.

The bank's consumer saving program rewards customers with up to $100 in rewards cards when they reach savings milestones. It  has generated “tremendous” customer interest since it began in 2010, according to the bank.

The program has helped nearly 2 million customers start saving. Current customers had more than $4 billion in savings as of the start of January 2014.

"Our customers have great strategies to save money, from bringing a lunch to work to adjusting the thermostat when they're away from home,” Powell says in a release. “Our new START campaign captures that spirit and demonstrates that with a little creativity and a meaningful incentive, saving can be very rewarding."

The campaign, dubbed "Tangible Rewards," is the first work from San Francisco-based advertising agency Butler, Shine, Stern & Partners, which was selected as AOR in 2013.

The campaign integrates television commercials with print, radio and social media. The television spots, which also are available on U.S. Bank's YouTube channel, will air in 32 cities, with print and radio also appearing in 74 markets through February.

In addition to the promotion, U.S. Bank is introducing a social media campaign on Facebook and Twitter called the #StartSaving Sweepstakes. The campaign encourages customers to share their savings tips for a chance to win up to $5,000 in a random drawing. The #StartSaving Sweepstakes, which will also include random weekly $200 giveaways, runs from Feb. 4 through Feb. 25.