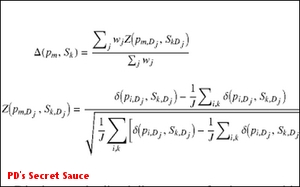 The next generation of Madison Avenue audience-targeting very likely will be fought over IP -- not the acronym for “Internet protocol,” where so much of the ad industry's recent focus has been -- but for “intellectual property,” including business models, processes and patents. In that battle, a couple of newer players have begun locking key patents that could substantially alter the shift from “media-buying” to “audience-buying.” One of them is PrecisionDemand, the big data-driven TV audience targeting firm run by former Madison Avenue media chief Jon Mandel, which has been granted patent No. 8,627,359 by the U.S. Patent and Trademark Office for its automated audience-targeting technology.

“The material aspect of this patent is that we can do what others only talk about doing,”Mandel asserted in an exclusive interview discussing the role intellectual property will play in the evolution of audience-buying, and how PrecisionDemand plans to leverage it. He says the company's goal is not to fight it out in court, but to utilize its patent recognition as official proof that its proprietary technology works better than others in an increasingly crowded field of next-generation TV audience targeting players.

The role of patents has already emerged in one key battle -- a patent infringement suit and countersuit involving the TV industry’s two leading addressable advertising infrastructure players -- Invidi Technologies and Visible World -- and one of PrecisionDemand's chief rivals, Simulmedia, was also recently granted a U.S. patent for its proprietary method of using data to enhance the targeting of television audiences for network TV promotions.

But Mandel claims PrecisionDemand's new patent gives it the exclusive legal right to do something many of the other players suggest they can do: match an advertiser's “first-party” data about its own customers with audience data from the TV set-top devices that many believe will be the future of TV audience targeting.

As a practical matter, Mandel says the real difference between PrecisionDemand and other advanced TV audience targeters isn't about legal rights, per se, but the capabilities it has developed over “seven years and $20 million” in investment capital to develop it.

“I don't think this patent will stop anybody from doing what they do now, because nobody does what we do, and nobody gets it as accurate as we do,” adds Debbie Reichig, the long-time TV and Internet marketer and researcher who recently joined PrecisionDemand as its chief revenue officer.

The combination of Reichig's intellect with its new intellectual property, Mandel says, will help distance PrecisionDemand from an increasingly crowded field of audience-targeting players not just for technical reasons, but because of her ability to communicate and apply what it can do in the marketplace.

Reichig is well recognized for developing collaborative approaches to using advanced forms of audience research and applying it to innovative advertising buys and even audience guarantees. It's something she has done at all the major media companies she has worked for -- including NBC Universal and Comedy Central, but especially at Court TV before it was acquired by Turner Broadcasting and re-launched as Tru.

One of her techniques has been to form advisory boards of her best customers and allowing them to set the standards, methods and deal structure based on the innovation they were looking to develop.

“I wanted ot have somebody who could actually talk research and got what this means,” Mandel explains about the hiring of Reichig. “And she also happens to know how to show those things to potential users and explain it in English.”

If she is successful, it will likely help move the entire industry of advanced audience-targeting forward, because it is often complex, full of techno-babble and engineering-speak, and has proven difficult for advertisers, agencies -- and even trade reporters -- to follow.

For example, this is how PrecisionDemand's own, soon-to-be released press announcement describes its new patent:

“The patent (US 8,627,359) covers the high-dimensional demographic vector matching technology that PrecisionDemand uses as one of several methods in its set top box TV ad targeting system. The basic method consists of four steps:

4.     Using the similarity score for targeting"

For her part, Reichig says “she can’t wait” to begin having conversations with potential customers, and mixing it up with potential competitors, because she believes PrecisionDemand can truly do what it says it can do, and is uniquely differentiated to do it.  “It’s why I joined,” she says.