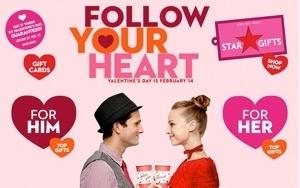 Looks like Cupid will be a little lonelier this holiday, with a new survey from the National Retail Federation predicting that just 54% of Americans intend to celebrate, compared with 60% a year ago. Those who plan to mark the day say they intend to spend a little more than they did in 2013 -- an average of $133.91 on candy, cards, gifts, and dinner, compared with $130.97 last year.

In all, the NRF predicts the holiday will generate $17.3 billion in retail sales, and the holiday is typically a make-or-break event for jewelers, florists, restaurants, candy and greeting card companies.

This year, 51% of those polled will send cards; 49% say they intend to buy some form of candy. And 37% hope to celebrate with a special meal, while 19% have plans to purchase some type of jewelry. The men included in the survey, conducted by Prosper Insight, predict they will spend $108.38; women intend to shell out $49.41.

Another 37% say they intend to send flowers. And while red roses are the perennial favorite, FTD reports that lilies are coming on strong this year, with purple the year’s trendiest color.

Retailers are looking for any V-day leverage they can find. Rite Aid, for example, is running a $19.99 special on red roses, as well as a #Wheresthelove contest through social-media channels, with six random prizes. The grand prize is free Häagen-Dazs ice cream for one year.

Some 26% of the 6,400 adults surveyed say they are likely to make their purchase online, about even with last year. Retailers are looking to maximize those online possibilities, too, from Neiman Marcus offering free gift packaging and Charbonnel et Walker Truffles on spending of $200 or more to Macy’s “Follow Your Heart” gift guide, with free shipping on $99 purchases. And eBay is already promising its shoppers 70% discounts on popular gifts.

But restrained celebrations shouldn’t hurt the quality of romance this year. Houston Asset Management just released its annual "Cost of Loving Index," and reports that just a third of the popular gift items it includes in its index became more expensive this year. And it adds that the small increase of 2.3% reflects a three-year trend in declining costs.

The biggest gain in prices is a 6.7% hike in the average cost of a silk tie; restaurant and movie ticket prices also increased. Lingerie, perfume and greeting cards remained stable. Chardonnay fell 10%.