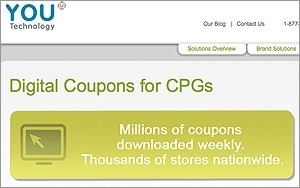 Awareness and interest continues to grow for digital coupons among consumers and marketers alike, reflecting the growing penetration of smartphones and tablets.

Now the owner of one of the country’s largest supermarket chains, The Kroger Co., is bolstering its digital coupon capabilities with the purchase of You Technology Brand Services, which operates a cloud-based platform for digital coupons and promotions.

You Tech’s network of retail partners includes over 10,000 stores (Kroger’s among them), reaching over 100 million U.S. households, with annual retail sales of over $100 billion. After the acquisition the company will continue to serve existing retail customers and partnering with new ones, while enabling Kroger to introduce new technologies and expand its coupon offerings for CPG companies.

As noted, retail chains and marketers have been rolling out new digital coupons products and services at a steady clip in recent months.

In October of last year, CVS introduced a new digital circular product, myWeekly Ad, which uses data from CVS/pharmacy’s ExtraCare rewards program to determine which products consumers buy most frequently, then highlights which are on sale. It also notes deals in related categories that may be of interest, based on purchase history.

That same month, Valpak introduced an augmented reality feature that enables consumers to see which nearby businesses have coupons on offer by simply holding up their smartphone to the horizon.

And in September 2013, Gannett’s Shoplocal, which publishes print and digital circulars, partnered with Eyeview to create digital circular ads with video, called V-circular, which allow retailers and national brands to target consumers at the local level based on demographic, behavioral and geographic data, as well as real-time local conditions like weather.