Exchanges Are Cost-Efficient, But At What Cost?

So how do the exchanges stack up?

Exchanges were more cost-efficient than the industry average all four quarters and led in terms of cost efficiency in Q4. There was a 67% decrease in cost during Q4. 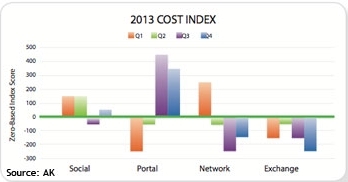 AK theorizes that this could indicate “that exchanges are becoming more efficient at driving engagement, and may be a good option if your campaign focus is on reaching a large audience at a low cost.”

But exchanges may not help marketers reach new audiences. In fact, in Q4, exchanges were the worst in terms of “reach efficiency,” which is a combination of reaching new users, exclusivity, and cost. It barely show up on the bar chart when compared to social’s “reach efficiency” in Q4.

Exchanges were well below the indexed average in Q1, Q2, and Q4, but they were actually the second best -- and above average -- in “reach efficiency” in Q3. Still, the channel’s extreme tumble (79%) from second best to clearly the worst between Q3 and Q4 is hard to miss. AK writes in its report that this “may point to exchange’s inability to reach new users.” 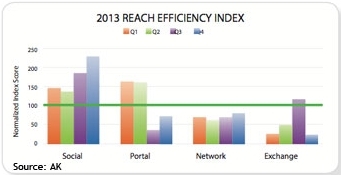 In fact, portals, networks and exchanges all failed to index above the average during the second half of 2013, which speaks to social’s ability to reach quality users. Exchanges have essentially been on par with portals and networks since Q3 2013 in terms of user quality.

All this goes to show that while exchanges are the best in terms of cost efficiency, they are not yet up to snuff on quality users -- or perhaps more importantly, the ability to reach new users.