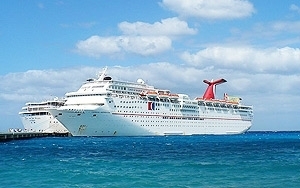 Carnival Cruise Lines has rebounded from its media woes of a year ago, according to the YouGov BrandIndex.

Last winter, the company had a series of well-publicized crises on their hands, including a disabled ship, The Triumph, adrift in the Gulf of Mexico.

However, according to measurements by the research service, Carnival not only brought its consumer perception back in line with the rest of industry this past fall, but their sales potential with consumers has rebounded above the rest of the cruise sector, says Ted Marzilli, CEO of BrandIndex.
By YouGov BrandIndex’s calculations, it took nearly a full year — 334 days — for Carnival to recover to its previous perception levels, half the amount it took both BP and Toyota with their respective problems. Carnival is comparable to J.P. Morgan in the wake of their “London Whale” trading scandal and subsequent appearance before Congress — that lasted 213 days.

"In our experience, multiple incidents do slow down recovery times," Marzilli tells Marketing Daily. "The good news for Carnival is that it was able to recover in time for this year’s ‘wave season.’ And while incidents do have a modest impact on the industry as a whole, our data also indicates that the number of US consumers who intend to take a cruise in the next 12 months has held steady over the past year."

Carnival's recovery may have been accelerated by a number of initiatives that restored consumer confidence, including spending $300 million in improvements in the fleet's safety system, and incorporating a review of each ship, Marzilli says.

Other confidence-building actions include forming a Safety and Reliability Review Board, comprising outside experts, including two retired U.S. Navy Rear Admirals, a former member of the National Transportation Safety Board and a former senior vice president with Delta Airlines.

While Carnival’s perception comeback is impressive, it is accompanied with rising purchase consideration levels, an indicator of strong potential sales. Carnival spent much of 2013’s fourth quarter ahead of the cruise industry on this metric, and is currently scoring just about even to a benchmark of its cruise industry peers.

About 30,000 adults over the age of 18 were interviewed, with a highly accurate margin of error of +/- 2%. All respondents were adults who say they are considering a cruise in the next 12 months.

Carnival Cruise Lines was measured with two of YouGov BrandIndex’s metrics: Buzz, which asks "If you've heard anything about the brand in the last two weeks, through advertising, news or word of mouth, was it positive or negative?"; and Purchase Consideration, asking respondents “When you are in the market next to purchase products in this category, from which of the following brands would you consider purchasing?”
brand image, customer experience, customer relations, customer service, marketing, research, travel
1 comment about "Carnival Cruise Lines' Image On Upswing".
Check to receive email when comments are posted.
Next story loading