Apple Wants To Get Into Your Head...And Media Will Start Reading Us 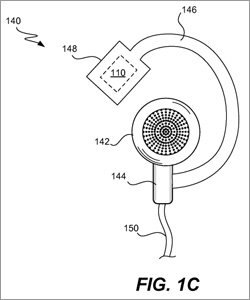 There is mounting evidence that one of the next major mobile forays for Apple will be health monitoring. There is the not-so-secret “iWatch,” of course. But as we also reported recently, the company has patented ad targeting methods citing that heart rate and blood pressure are possible data points to determine mood states. And now Apple Insider reports that Apple is exploring health sensors in your head.

Well, in your ears, at least. In a patent awarded Tuesday, Apple proposes biometric headphones with embedded sensors to detect not only head movement but also perspiration, body temperature and heart rate. An accelerometer is also present in part to gauge head movements and perhaps control the attached device.

Apple describes the monitoring functions variously as an “activity sensor,” a “biometric sensor” and perhaps most ominously as a “psychological sensor.” Talk about getting into your head. But this last idea actually relates somewhat to the earlier ad targeting patent that focused on ascertaining a user’s mood.

Apple speculates on use cases here. Head gestures can be used for basic device interactions, such as nodding to activate a function or answer a phone call. They can also determine the direction a person is gazing, perhaps to signal certain audio content from an app. This is an interesting twist on the classic augmented reality interface of holding a phone up to a space to get a visual overlay. This technique would make an audio overlay possible.

The biometric sensors can work in many ways with apps. The patent suggests, for instance, that an app can detect when someone is physically tired and needs an app to signal a break. It might detect uphill activity that changes the app state. It could change music according to level of activity and send audio prompts to adjust activity levels or posture.

The larger point here is not just that Apple clearly will enter the health monitoring space with ever more sensor-based gadgetry. It is really more about the intimacy of the technology itself and the ways in which wearable media get closer to and help quantify aspects of us that we barely know ourselves, let alone share with most people. The privacy and security issues are one very obvious piece of this. But having hardware and software gauging even subconscious aspects of ourselves in order to shape media experiences has unpredictable consequences for how we view ourselves.

As the technology gets physically closer, it becomes something more than personal. It starts picking and choosing what it will tell us about ourselves we didn’t already know. That is a special and new kind of authority and external interpretation of our “self” that demands more critical scrutiny. The technology is becoming so intimate and close it is flipping the old polarity. Instead of us reading media, the media will be reading us.