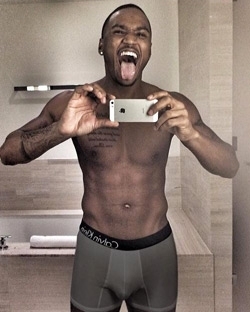 For all those who have been fretting that there just aren’t enough pictures of people in their underwear on the Internet, Calvin Klein has a plan. It’s launching its latest line of men’s drawers with a new #mycalvins campaign, encouraging bloggers, models, musicians and even run-of-the-mill fashionistas to post their skivvy selfies.

And in a social media twist, the brand is trusting its fans to create those images. Rather than initiating the effort itself, it sent samples of its new underwear to an elite group of influencers, asking them to post any kind of portrait they like of the famous waist-banded knickers.

A spokesperson for Calvin Klein says the digital “show yours. #mycalvins” effort kicked off with supermodel Miranda Kerr and R&B artist Trey Songz, who each posted shots of themselves in the dainties, which immediately began triggering hundreds of thousands of “likes.”

The second wave of Instagram selfies has already come from such bloggers as Chiara Ferragni of The Blonde Salad and Leandra Medine of the Man Repeller. And Calvin Klein, a division of PVH Corp. will also use the hashtag on other social media platforms.

The company says that in less than 24 hours, the first of the three influencer photos have had more than 1 million total fan interactions among an audience of over 50 million. Songz, who has a combined following of over 26 million fans on his official Instagram, Facebook and Twitter accounts, posted two photos that have generated some 830,000 interactions.

Altogether, it says is has tapped 100 influencers from 15 countries to don their drawers, with a combined reach of more than 250 million fans on social media.

“Instead of asking the audience to follow the brand, they're allowing the fans to create the #mycalvins movement, therefore making it feel more organic and less promotional,” Megan Wintersteen, Huge's lead planner for social, tells Marketing Daily. And by concentrating on an elite group, the sneak peek adds “a layer of exclusivity or first-to-know, which is always a great way to increase engagement.”

But its smartest move, she says, is that anyone with a smartphone and a pair of Calvins can strike a pose, “which drives purchase intent for new customers and incentivizes loyal customers to check out the latest style.”

Maybe, but isn’t there at least some danger that, sooner or later, even Instagramers will get bored of the selfie? Apparently not. "Send us your selfies" works because it capitalizes on an existing behavior,” she says. Sex sells, after all, and Calvin Klein is an aspirational brand. So giving fans “permission to submit photos of themselves in their underwear is basically the world's best excuse to pose half-naked on Instagram without seeming self-serving,” she adds. “Not a trend I see disappearing any time soon.”

Others say the effort is also resonating because of the brand’s history, a nod back to the early 1980s, when those signature waistbands and then-shocking male models were the toast of the fashion world.

“We've seen an increase in consumers gravitating toward a brand heritage story,” Tom Edwards, VP, digital strategy & innovation for The Marketing Arm in Dallas, tells Marketing Daily. “Bringing back an iconic campaign from the '80s with a selfie twist is sure to drive a significant amount of engagement.”

The company has created a hub on mycalvins.calvinklein.com, which will serve as a user-generated content destination that is also enabled for e-commerce.

The campaign for the new Calvin Klein Dual Tone highlights its color and fabric technology and includes a video directed by Fabien Baron and print ads shot by Steven Klein. The print ads are scheduled to appear in multiple editions of GQ, Men's Health and Esquire. Additional digital support includes Facebook, Tumblr, and Youku, as well as a first-time partnership with Reddit. The company also intends to roll out an outdoor advertising campaign.

The campaign extends over 20 countries.