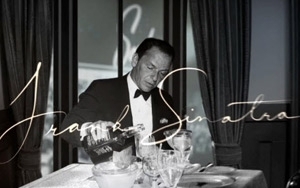 Jack Daniel's has launched a $2.3 million campaign for Sinatra Select, a special release of the Tennessee whiskey honoring Frank Sinatra.

The legendary singer was a huge Jack Daniel's fan -- sipping it on stage, as well as in private. One story has it that his family buried a bottle of the whiskey with Sinatra.

Jack Daniel's parent Brown-Forman is putting the distribution and marketing in place this year in time to capitalize fully in 2015, which would have marked Sinatra's 100th birthday (he died in 1998).

Sinatra Select is 90-proof, versus JD's current 80-proof standard, has more "oak and spice notes," and comes in a commemorative box with a booklet explaining Sinatra's history with JD. It goes for $150 and up, making it the highest-priced version of JD released to date.

Jack Daniel's often does special releases for the duty free/travel retail channel, and this one also began that way. But the Sinatra version is now being rolled out, starting with Sinatra haunts including Las Vegas, New York, Chicago, San Francisco and Miami, with national retail availability as of June.

The campaign, of course, leverages Sinatra's huge popularity (his recordings' global sales are more than 150 million, surpassing Streisand and Springsteen, although not the Beatles or Elvis Presley, according to MarketWatch) and his "Rat Pack" cool.

The creative, from Arnold Worldwide, includes a 30-second "Frank the Man" TV spot that combines real footage of Sinatra with animation to spotlight his love of the brand, as well as digital ads.

The Tv spot, which drew more than 7,400 views on YouTube in the first day it was posted on Feb. 25, is being aired on ABC's "Jimmy Kimmel Live," NBC's "The Tonight Show" and cable outlets including ESPN, FX, Discovery, and Comedy Central.