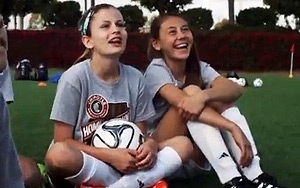 Chipotle Mexican Grill has signed up to be the "Official Fast-Casual Mexican Restaurant" of Major League Soccer. The program, which the company said will be its largest single sports partnership to date, will feature promotional programs with 12 MLS teams and players.

Chris Arnold -- head of communications at the restaurant chain -- says of the grassroots youth soccer program, which involves promotions, clinics, and games: "It makes our partnership experiential, so it's not just about branding visibility."

He tells Marketing Daily that the company has done programs with individual MLS teams in the past but not at the league level, "and nothing as large-scale and integrated as this. We really wanted to be sure it included components that would engage people in local communities." Chipotle, he says, developed the Homegrown program with MLS, with the "homegrown" a tacit reference to the restaurant's sustainability efforts and locally grown provenance philosophy.

The company chose to do more with soccer because, per Arnold, the sport indexes strongly with the Chipotle Mexican Grill customer demographics. "People who are our customers watch and/or play soccer and that's important to us; and more generally we are speaking to people who share our values with regard to food and active lifestyles."

Arnold adds that Chipotle's core customer demo is better educated and a little more affluent than customers of other fast-food chains. Soccer indexes strongly with this population, many of whom send their kids to AYSO events (American Youth Soccer). "And soccer is one of the fastest-growing sports in the country, and with the World Cup as a shot in the arm, the timing is makes a lot of sense, too."

Chipotle says that part of the program includes sponsoring a boy or girl athlete who, during 10 MLS Club games, will be Chipotle Youth Homegrown Athlete. As such he or she will get four tickets to the game, a special callout during it, a chance to meet players and coaches, dinner at Chipotle with his/her team, and the opportunity to host a fundraiser for his/her team at a Chipotle location. Chipotle and each of the 12 MLS Clubs (FC Dallas, Houston Dynamo, LA Galaxy, Portland Timbers, Seattle Sounders, San Jose Earthquakes Philadelphia Union, Sporting Kansas City, Colorado Rapids, Columbus Crew, New England Revolution, and Chicago Fire) will host free soccer clinics for up to 200 kids utilizing MLS players and coaches to teach soccer fundamentals.

Omar Gonzalez, LA Galaxy Defender, two-time MLS Cup Champion and member of the U.S. Men’s National Team, will represent MLS as the first spokesperson. He will be featured in anthem and skills videos to promoting the partnership on his social media channels.