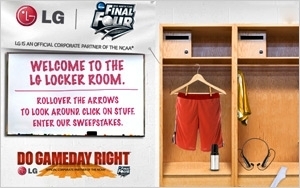 With the Final Four tournament happening in Texas this year, one can expect the festivities to be big. In the run-up to the NCAA basketball championships, LG Electronics USA is enlisting homegrown talent to make sure they’re also done right.

In its fifth year as an NCAA corporate partner, the electronics brand has enlisted former Houston University standout and former Houston Rocket Clyde “the Glide” Drexler to help fans “Do Game Day Right.” Drexler’s status as a native Texan and well-known Lone Star state basketball star did play a role in his selection as a promotional spokesman, says Michelle Donovan, director of consumer promotions and events for LG.

“He has strong ties to the community in Texas, and he’s knowledgable about both the college and professional basketball [scenes] in Texas,” Donovan tells Marketing Daily. “We wanted to find that one personality that connected with the Texas community and is credible as a fan.”

Throughout March, Drexler will offer tips to fans hosting March Madness viewing parties, share recipes for game-day snacks, show how to keep up with the latest scores through LG phones and give advice about setting up the ultimate viewing experience. Drexler will also participate in LG’s tailgate activities during the Final Four weekend in North Texas in April.

Also, LG is launching a “Locker Room Sweepstakes” with the grand prize of an expenses-paid trip to the Final Four tournament this year. (“We wanted to make sure the consumer got an immediate gratification for it,” Donovan says.)

Other prizes include LG televisions, tablets and appliances. The sweepstakes will be promoted through LG’s Facebook page as well as a dedicated Web site, where viewers can scroll through a virtual locker room to learn trivia about basketball and information about LG’s products.

“We wanted to create an experience where fans were engaging with it,” Donovan says of the approach.