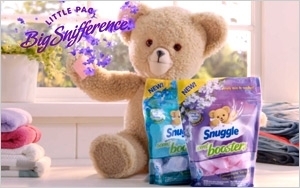 Snuggle's new ad campaign for its Scent Boosters fabric softener features the Snuggle Bear, the brand's 30-year-old icon. But it also mixes in a lot of animation, taking viewers into a tangerine-dream, Willy Wonka-like scent factory -- an adventure meant to elaborate upon how Snuggle makes and boosts the Snuggle scent.

The Snuggle "Olfactory" features huge, fantastical Erlenmeyer flask-type lab-ware, machines that spew lavender clouds and visuals that one might find somewhere in the lyrics to "Lucy in the Sky with Diamonds" if you played it backwards.

The effort, via Lowe Campbell Ewald N.Y., touts what Snuggle folks say is the first-ever, single-dose scent booster from any major brand. Television creative breaks this week with print to follow and digital elements from Lowe Profero starting April 1. The agency was tapped as digital AOR for the Sun Products Corp. fabric conditioning brand after it joined the Lowe network.

Bibie Wu, VP of fabric conditioning and visual branding at Sun Products, tells Marketing Daily that the campaign is an evolutionary change in branding meant both to get into how the new product is made and to evoke more about the Snuggle Bear character, which has been around the brand since the ’70s (and was once voiced by Micky Dolenz of the Monkees.) "It really brings viewers into his world."

Sal Taibi, president of Lowe Campbell Ewald, tells Marketing Daily that the bear is a big product differentiator so it made sense to extend that equity with the new creative. He says going with the animated style helped communicate how the product is made. "In a very fun way, it says there's a different technology involved; the factory idea let us do something really new and different."

The fabric conditioning business is a $2 billion industry, in which Snuggle is number three in a category that has about 70% household penetration, notes Wu. "That's big, but while everyone has to use detergent, you don't have to condition clothes. Because it's more discretionary, having effective marketing is more important. You have to keep it in front of consumers."

Says Taibi, "We certainly never used animation to this extent, and in a lot of ways it's a more fun and creative way to demonstrate the product. This factory device will live in other places; you want a strong idea that defines the brand and can live anywhere, and that's what we have."