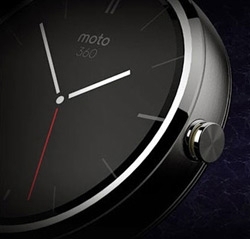 What will advertisements look like on wearable devices, and how will the auction model work, as Google plans to extend its Android operating system to support smartwatches and other wearable devices?

Motorola introduced the Moto 360 Wednesday, but companies like Asus, HTC, LG, and Samsung -- along with chipmakers Broadcom, Imagination, Intel, Mediatek, and Qualcomm -- also plan to bring smartwatches to market later this year through fashion brands like Fossil.

Location-based services typically supporting mobile-only applications -- as well as climate conditions known to augment search engine advertising -- will have an impact on messages served via wearable devices, per eMarketer Analyst Bryan Yeager. "Mobile payments and integrating commerce will become important, and using the information to deliver loyalty incentives and promotions," he said.

David Rodnitzky, 3Q Digital founder, said location and device information with interests on Facebook advertising will play a key role. "I think the bid auction will work the same as Facebook or Google today, where an advertiser chooses a combination of targets like location, user profile, inferred or user-provided behavioral data, and then competes against all other advertisers trying to target the wearable device," he said. "Due to the size of the devices, I would assume that this would be a winner-takes-all auction, where only one ad is served."

In a wearable world, keywords could become a thing of the past. Apple's smartwatch -- rumored to support biometrics -- would factor in location, activity, and fitness levels from the wearer's pulse. It would have the ability to identify "snippets of data gathered from the wearable device and sync with the wearer's mobile device, acting like a bridge to bring you into the mobile environment," as well as a larger screen, said Jim Grates, SVP, managing director of Socialyse, Havas Media. "The biometric tracking would monitor blood sugar levels and if you're walking or in a car."

Grates said marketers should expect to see some changes in the watch industry. For me, the timepiece went out with the entrance of the mobile phone in my life back in 1990. He and I both agree that the Moto 360 looks similar to a Movado. Now all it needs is the diamond.

Rimm-Kaufman Group scientist George Michie believes the devices will capitalize on local search marketing and advertising. He said the opportunities tie primarily to GPS and location-based signals. The technology applications already exist. Russian search engine Yandex owns one type that would work well in wearable devices. In fact, the company acquired it recently with the acquisition of KitLocate.

Michie believes content will become the ads for the small screen, serving up as wearers pass by the physical store. This will likely that mean opt-in services and frequency governors to prevent spam that would make these devices more annoying than useful. "I might give my device permission to push entertainment offers to me for a period of time, or dinner suggestions, or let it know that I'm interested in vacation ideas," he said.

Calling attention to two paradigms, Michie said voice search will allow consumers to ask "Where can I find a shoe repair place within five blocks?" while social signals from their network would integrate what friends think to get questions answered such as "What's the best Chinese restaurant within walking distance?"

No matter what the content or context, marketers understand that the small screen will dictate "very exclusive ad real estate." The result will likely be one ad listing won at auction in real-time. Michie said the ad marketplace that produces useful -- rather than intrusive -- ads will be the one that wins and will likely be based on voice search.

Motivity Marketing Founder Kevin Ryan hopes those who are building the applications and platforms have enough sense to keep the ads out of the devices. Any ad experience on a device will only increase friction, make it more difficult to use and inhibit adoption. "Simply put, the ad gold is in assembling personalized data and serving up a more customized experience anywhere but on the device itself," he said. "Social and app integrations on fit devices, for example, not only help them sell more devices, but assembling data around people's habits help create more effective experiences."