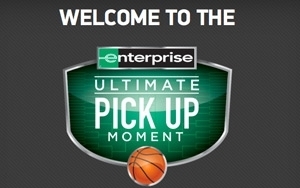 rise Rent-A-Car is once again linking to the NCAA Basketball Championship to a promo that invites consumers to participate in the Ultimate Pick Up Moment program.

The rental car company has been an official corporate partner of the NCAA for the past nine years.

The promotion, which enlists Turner Sports basketball analyst Kenny Smith, runs until April 3 and is supported by an integrated marketing campaign that includes traditional and digital advertising, public relations and social media efforts.

This year’s program is one of the largest marketing activations Enterprise has executed for NCAA March Madness, according to a spokesperson. It targets sports fans -- specifically March Madness fans -- who are both current Enterprise customers and prospective customers.

Consumers can visit the Enterprise Facebook page and vote for the greatest-ever pick-up moment in March Madness history. A pick-up moment is a game-changing play and/or performance where players defy the odds, do the impossible and inspire everyone watching.

After voting on each matchup, participants can also enter a sweepstakes for a chance to win weekly prizes, and one grand-prize winner will score two tickets plus a trip to the 2015 NCAA Men’s Final Four game.

Smith will serve as the campaign spokesman and will also be featured in digital advertising.

The promotion engages customers and basketball fans nationwide in an interactive experience designed around the service feature the company is best known for, “We’ll Pick You Up,” says Jim Stoeppler, assistant vice president, Enterprise Brand Marketing.

“Just as basketball student-athletes work to pick up their teammates and fans through inspirational plays, Enterprise employees pick up customers and co-workers with best-in-class customer service,” Stoeppler says in a release.

Patterned on the NCAA Championship format, 16 individual pick-up moments will be paired against one another, and fans will vote on the matchups through four separate rounds of voting. The moments that receive the most votes in each round will advance and, at the end, one ultimate pick-up moment will be crowned champion.

In addition, after voting on each matchup, participants can enter a sweepstakes for a chance to win prizes, and one grand prize winner will score two tickets plus a trip to the 2015 NCAA Men’s Final Four.