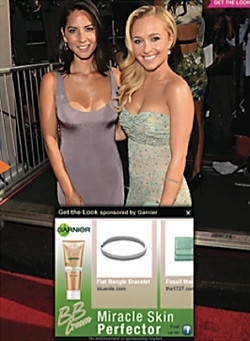 In-image ads -- units overlaid on relevant editorial images on Web sites -- aren’t the most widespread type of native advertising. But given the rise of the visual Web in recent years and explosion of photos online across the desktop and mobile, there’s no shortage of potential inventory.

To help marketers and publishers get a better handle on in-image ads, the Interactive Advertising Bureau (IAB) on Thursday issued a primer on the format, including a definition, disclosure principles and case studies. Much of the content is drawn from companies providing in-image ad solutions, including GumGum, Google-backed Luminate, Speed Shift Media, Stipple and Vibrant Media.

The document is an outgrowth of the native advertising playbook the IAB introduced in December, which defined six basic native ad categories and providing guidelines for their use. The new primer places in-image ads within the “custom/can’t be contained” category, “though as they grow they may be considered as a separate native ad type,” it states.

The guide points out that in-image ads come in different forms, from display ads or product listings inserted into images or video or rich media ad units that appear only when a user hovers over the picture or clicks on the ad. And because the ads appear inline with content someone is viewing, the paper says the ads have been shown to drive higher viewability than traditional display units.

“We know we’re in a visual world, we know we’re in a streamed content world, we know that for getting people’s attention in that content stream, the most effective form is visual, and because of that it is certainly a ripe place for an ad product,” said Peter Minnium, head of brand initiatives at the IAB. That said, he notes the ads have to be relevant, brand-safe and provide proper disclosure. “And if not done properly, it could trip up development of this format.”

To that end, service providers delivering in-image ads at scale rely on technologies intended to programmatically determine the meaning of images and dynamically match them to the most contextually relevant ads. Targeting options can also extend to geographic and audience-based criteria.

When it comes to disclosure, the IAB recommends following the same guidelines set out in the native advertising playbook. It must use languages or imagery that the ad has been paid for and is prominent enough for a user to notice it in the context of a given page. That still leaves a lot of room for advertisers to decide exactly how to indicate a paid ad.

Of the four examples shown in the primer, only one appears to be clearly labeled as an ad. But since they look like typical banner ads anyway over images, users may not be as apt to confuse them with regular content as some other types of native advertising, like certain in-feed ad units. They also allow users to close the unit by clicking in the right corner.

One ad, for example, that ran on NYDailyNews.com and other news sites, features a rich media unit with a button to play a video spot for Cat’s Pride Fresh & Light cat food. Another featured a carousel ad for a Garnier skin care product slapped on a photo of “beautiful women.”

In terms of results, the IAB says in-image ad campaign are delivering brand lift for awareness an average rise of 37% -- almost three times the industry average, according to Nielsen Online Brand Effect norms. Still, that begs the question of why they haven’t become more ubiquitous. The standard on more visually-focused properties like Instagram, Pinterest and Tumblr has been for marketers to supply their own brand images to better blend with a user's activity stream.

Jared Belsky, president of 360i, said the digital agency is only “lightly exploring” the use of in-image ads. The challenges for the format include achieving scale -- since not all publishers will accept it -- higher cost, and building awareness among consumers.

“These new formats are being hurried to market to drive the next generation of display advertising, in hopes of expanding ad formats beyond the click,” said Belsky. Since in-image ads are being positioned as native units, he added that it’s especially important that publishers and brands ensure the user experience is relevant and appropriately balanced.

Minnium said the guide for in-image ads is the first in a series of primers focusing on other native ad formats. “The reason we’re been very aggressive with native advertising is that we want to help these new forms establish a market at the highest common denominator,” he said.