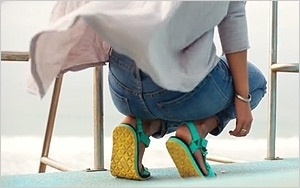 Sport-sandal leader Teva is celebrating its 30th birthday with a new digital campaign focusing on fun, which plays off its partnership with the Bonnaroo Music Festival.

“With our Originals line, we target a mindset rather than a demographic,” Lucas Martinez, the line’s marketing manager, tells Marketing Daily. “So we are following this adventurous, active consumer to their favorite energy sources, the places these consumers go -- like Bonnaroo -- to enjoy themselves. Our products help them pursue that activity.”

The shoes were originally invented by a Grand Canyon River Guide back in 1984, he explains, frustrated that “people couldn’t wear sneakers in rafts, because they’d get nasty once they were wet, or flip-flops, because they’d get lost.” Since then, they’ve gone on to earn a diehard following among the hikey-climby crowd, plus relentless ridicule for their enduring ugliness. (Not so coincidentally, Teva is owned by Decker Outdoor, which owns UGG Australia, an equally adored-yet-ugly brand.)

This marketing effort, from Heat, its San Francisco based agency, is dedicated not so much to the brand’s 30th anniversary, as “modern day adventure.”

“The whole campaign is centered around the reintroduction of 'The original sport sandal,’ and we wanted to reach consumers who have nostalgic memories, and also reframe what the product means. And we wanted, as much as possible, to collapse the distinctions between paid, earned and social media.”

For example, in its first year sponsoring Bonnaroo, a #Ready2Roo campaign will include tips on music festival fashion and camping. And beginning April 1 (the music festival is in early June), fans can upload photos to the festival Web site, along with their tips for making the most of the four-day event. Prizes will include VIP ticket packages.

And in a partnership with popular fashion blog Refinery29, users will post their own Teva-esque photos on Instagram, for the chance to win “life-changing excursions,” he says. “In turn, we'll have them write about these trips as they go.” The point, he adds, is to encourage adventure and spontaneity within the Teva community.

A video is also running on digital channels.

Decker, based in Goleta, Calif., says Teva’s sales were flat in the last year, up just 0.8% to $116.4 million compared to $115.5 million in the previous fiscal year. But in its most recently announced quarterly results, the brand’s sales jumped 13.6% to $15.5 million, compared to $13.7 million for the same period last year. And in the year ahead, it is forecasting a sales gain of 5%.