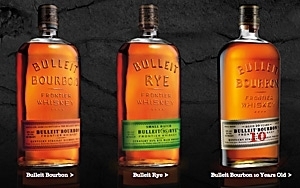 Bulleit Bourbon, Diageo's small-batch brand is getting in front of the lens at film festivals and behind the lens for a few independent artists. The tactic is part of the company’s effort to boost awareness and sales for Bulleit without losing its small-batch outsider personality, an asset in a business where, just like the craft-beer boom, people are getting hip to smaller “bespoke” brands.

For Bulleit, which Diageo acquired in 2001 when it bought Seagram’s wine and spirits business, the positioning is around a frontier image. That, broadly speaking, means people striking out to do their own thing. Last year Bulleit was sponsor of, and had brand integration in, an all-black indie western, "You Die Before Dawn," which was written and directed by English musician, and producer Jeymes Samuel, who, no coincidence, is a.k.a. The Bullitts. The bourbon brand helped screen the film in New York and at SXSW. Bulleit was also in the film as the main pour behind the Old West bar featured in the movie.

This past weekend, the brand, which has been running out-of-home ads in New York as part of Diageo's ramped up marketing, was a major sponsor of the First Time Fest Film Festival. A social media and influencer effort asked filmgoers to choose the "frontier film" of the series; not a western but one evincing a cutting-edge aesthetic or innovation. The program included integration in the festival, and a whisky dinner, and participation of actor/writer/director Jayce Bartok, whose film "Fall to Rise" is featured. Bulleit is one of about 24 festival sponsors.

Jim Ruane, marketing manager for Bulleit Bourbon, tells Marketing Daily that the brand has been involved in several festivals recently, four of them premiering new work. They include the Pan African Film Festival, and the Big Apple Film Festival. "We think what independent film makers do embodies what our brand stands for. There is a struggle, a path and a process in independent film that is probably more entrepreneurial than other art forms.”

He says that aligning with independent film both reaches a more affluent, younger audience, and is normative for the brand’s own iconography: Tom Bulleit quit his law career in 1987 to revive a whiskey recipe his great-great-grandfather — who apparently vanished without a trace while delivering some casks to New Orleans — had started. “The indie spirit fits nicely with folks who we want to continue to have a relationship with: the adventurous, independent minded So this is a nice footprint for us to tell that story."

This year Diageo is expanding the brand into over a dozen global markets, but has been able to avoid killing its equity with over-the-top marketing. Ruane says the company's major focus is still old-school evangelism in clubs, and events, and getting bartenders to be brand ambassadors. "We have a master of whiskey in all of our major markets. They are very important."