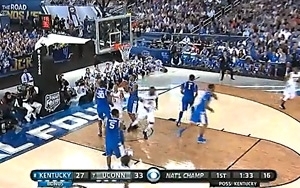 Now that it’s all over but the shouting (UCONN beat Kentucky for the championship last night), new research finds that advertisers should consider buying into the NCAA Basketball Tournament early—like Selection Sunday early—when broad engagement with the event runs deep.

The research, from Spark, a unit of Publicis Groupe’s Starcom MediaVest Group and RealityMine, shows that unlike many other major sports events, consumer engagement for March Madness actually tips off "right away."

Respondents showing pronounced engagement across devices on Selection Sunday before a single ball is dribbled in the Tournament.

This early “madness” is somewhat unique to the college basketball championship, given its broad field of 64 teams, as well as the broader phenomenon in our culture of people of all ages, races, ethnicities and socioeconomic strata filling out their brackets. "Our clients are always interested in participating in these live sporting events, so we conducted a study to learn more about the media landscape and how audiences use the multiple media touch-points," says Scott Hess, SVP Human Intelligence, Spark.

"We found there are really two funnels that are big at each end and start to narrow in the middle. Most other sporting events, whether it's tennis or the Super Bowl, receive most of the attention at the very end," says Hess. This makes March Madness a rare event in which fan engagement is sustained, rather than slowly building to the championship.

"For advertisers, there's a great opportunity to deliver early value by focusing on tournament back story, talking about bubble teams, who's injured, who's hot, and the like," he adds. "Millennials, in particular, are especially responsive to this. They love to be able to dig deeper, once engaged."

This engagement isn't restricted to traditional TV. "Each channel is additive and is not replacing one another," says Hess. "We also believe we are at a unique point in our culture, driven by the prevalence of and reliance on ubiquitous and easy-to-navigate mobile tech/content."

Multiscreen engagement is common throughout the entire tournament, with Spark research finding large numbers using Facebook and messaging apps to connect across friend networks during games. There’s also a bump in interest in radio in the days following Selection Sunday.

Still, viewers aren't necessarily all about the game. Even nonsports app Candy Crush showed a sizable engaged audience during games, suggesting the casual nature of fans who are either skimming early round games or supplementing their casual interest in some of the games with a bit of fun.

The study's methodology, what is called "quantitative ethnography," aimed to shed light on cross-media device usage, as well as other consumer behaviors and attitudes, against the backdrop of the tournament. The companies created a cross-media panel of 500 people using the USA TouchPoints e-diary and passive behavior tools. They then tracked panelists’ actions in order to determine how the games impacted consumers’ cross-media consumption habits.