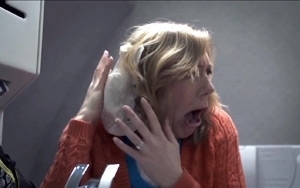 Clorox is funny? Most of us, especially the Boomers, probably still put Clorox in the same category as Phisohex (remember Phisohex?): heavy-duty, hospital-validated cleaning and sterilizing, all business, no laughs. Well, younger people --  especially new parents -- hopefully won’t think of the brand that way, and the company is hoping to bring a warmer, gentler, and yes, funnier Clorox to them. And they are doing it -- where else -- through real-time social comedy, with consumers suggesting topics while actors embody their ideas. In other words, we’re talking improv comedy, live on your computer.

The Oakland, Calif.-based company on Wednesday night is getting out its message with Chicago’s famed The Second City improv troupe to create a live-streamed, four-hour performance, the “Clorox Ick Awards.” Rachel Dratch, formerly of SNL, and a Second City alumna, serves as host. The cast will comprise Second City actors. Second City Communications, which is the marketing arm of the group, partnered with Clorox to create the program.

Basically, the actors will receive tweets, hand-delivered on camera, via a guy who strolls up on a red carpet, and then they will go right into the “The Harold,” or whatever the correct term of art is for this kind of improvisation. The camera will shoot away, and the video content will be streamed live on tweetcast, and www.clorox.com\laugh. Thereafter the video will live there and on Clorox’s YouTube channel. The improv ideas will come from consumers' tweets about their own parenthood-mess scenarios to #ickies. The actors will then reenact them under categories like "Showdown Mess" and "Most Epic Mess."

Dratch tells Marketing Daily that improv implies risk -- meaning sometimes one can't count on the parachute opening and sometimes the reserve fails, too. "We are going to be seeing these tweets for the first time, so sometimes it will really go well and sometimes not." She adds that the four-hour stretch of time won't be too hard on the cast because there are second- and third-string actors on the benches. "We have a pretty big cast so it will be like a sports team with two or three people in each improv, rotating in and out."

Rita Gorenberg, PR and social media manager at Clorox, tells Marketing Daily that the program is a new experience for the brand. "In the past, we leveraged Twitter for activations. But this is the first time we are leveraging the platform for something like this. We noticed that social media is go-to for parents to share and sympathize and laugh about these early months. Organically, on their own pages, they share already. We thought about how to take this insight and turn it into something we can also participate in. The real-time sharing aspect was an inspiration."

Dratch says she wanted to be involved partly because she, also has never done anything like this, and also because it brings her back home, creatively, to the troupe that also produced Tina Fey and other SNL regulars. "For me to come back to Chicago and re-team with Second City is great. That was my stomping ground. And improv is so theatrical you usually have to go to a real theatre to do it, so this is kind of cool and appealing to me."

To get the word out, Clorox has been going to influencers, including social groups like DadBloggerGroup, its own properties, and promoted tweets to get the word out, per Gorenberg. She says that by early Wednesday there were about 1,700 RSVPs.