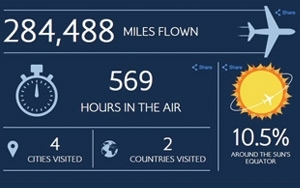 British Airways has launched an online tool called “My Flightpath” which provides customers with their own personal travelogue.

Available on ba.com, it provides members of the airlines Executive Club (which anyone flying with the company can join for free) with a timeline and map of each flight they’ve hopped on since joining the club. My Flightpath also highlights the destinations and countries that members have flown to most frequently.

The tool, which launched in late March, is available to anyone from frequent to occasional travelers, says John McDonald, VP of marketing at British Airways.

“We wanted to give customers something that helps to capture the magic of flying as well as allows them to easily track and share their personal traveling milestones,” McDonald tells Marketing Daily.

A “My Passport” feature awards customers with stamps after they reach milestones, such as the number of countries they’ve visited. Members have the option of sharing their milestones with friends and colleagues on Facebook, Twitter and other social networking sites.