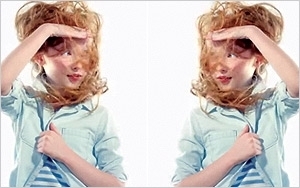 Despite its bumpy financial results so far this year, some industry experts are impressed. While Gap has “stumbled out of the gate” this year, write Sterne Agee analysts Ike Boruchow and Tom Nikic, it “laid out the initiatives that should drive performance over the long-term. With benefits from omnichannel strategies, responsive supply chain initiatives, seamless inventory management and international growth (particularly China), we believe Gap will continue to drive solid earnings growth over the long-term.”

“As the retail landscape evolves, we continue to deliver on our omni-channel roadmap and focus on owning the shopping experience of the future,” says Glenn Murphy, Gap’s chairman and CEO, in the presentation, which was also webcast.

The company has had a big hit, it says, with its reserve in-store program, generating 500,000 transactions so far, as well as its find in-store and ship-from-store options. And it plans to begin testing a new order-in-store capability in June, which will allow shoppers “instant access to expanded product offerings online.”

The biggest stumbling block to converting shopping visits to actual sales, it says, is lack of product availability. “If a customer's desired size/color/style is not available in store, it can be ordered right then and there, resulting in higher conversion,” write the Sterne Agee analysts. “Other initiatives aimed at improving conversion include self-checkout (currently testing in select stores) and greater personalization of e-mail/website presentations.”

Gap says it intends to expand reserve-in-store to all U.S. Gap stores by the end of the second quarter, enabling online and mobile shoppers to reserve clothing at more than 1,000 Gap and Banana Republic stores.

In the global apparel market, valued at about $1.4 trillion, China is the second largest apparel market, and the company says it expects its sales there to reach $1 billion in three years. The company says its aided brand awareness, just 35% in 2010, has risen to 70% there, “and even as high as 80 to 85% in the kids/baby market,” reports Sterne Agee, which estimates the company already has some $400 million in annual sales in China, through its 80 stores and e-commerce efforts.

Separately, the company also says it’s tapped Marissa Webb, known for her work at Club Monaco and J. Crew, as the new creative director/EVP design for its Banana Republic division. It says it intends to invest in her Marissa Webb label, sold at Barneys New York and other high-end stores.