Where Have All The Rodents Gone? 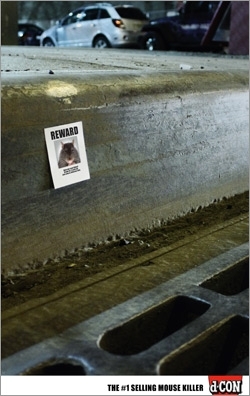 Pest control is a complicated advertising category. People only pay attention to these products when they have a problem with unwanted guests, so brands prefer to diligently target consumers exactly when they become interested in their services.

Even then, they tend to be influenced by the same straight-forward educational messages that worked decades ago.

The integrated campaign across print, radio and digital promotes its services in a dark, humorous manner, including ads that show posters of missing mice placed at mouse level at fire hydrants, gutters and trees.

"Typically pest control advertising is seasonal, but as the No. 1 selling mouse killer, we wanted to be top of mind before the problem starts and consumers go to shelf," says a Havas Worldwide spokesperson.

This campaign is notable for its major support behind both traditional and new media tactics.

"There are two ways of looking at how we invest behind digital and social," says Rakesh Kapoor, CEO and Executive Director, Reckitt Benckiser, while speaking with financial analysts. "One is truly understanding the consumer path to engagement and purchase, and that path is not necessarily as straightforward as it used to be. So they are interacting with brands and with categories in multiple touch points, through TV, of course, through point-of-purchase, through social and digital.

"So the first exercise is to truly understand for each of your categories, what those most critical touch points is. And when we think about that, we then try and see how to make the right impact of the right touch point. I think in the past, as I've said before, is that RB does not have to look over its shoulder to see which are the companies doing a better job in social and digital," Kapoor adds.

Other assets to launch later this year associated with this d-Con initiative include a TV campaign, as well as additional communications at the start of peak rodent season in the fall.