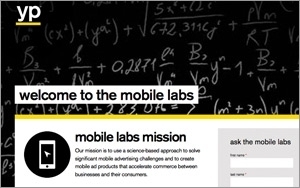 Got all that? What it boils down to is making mobile advertising work better for the small and medium-sized businesses that market on YP's mobile site and apps. That’s especially important since half of the traffic to YP.com is now coming from mobile, according to David Petersen, YP's vice president of mobile.

But mobile still has not lived up to its vaunted potential as a highly targeted, always-on ad medium, acknowledges Peterson, formerly CEO of Sense Networks. “I think advertisers and agencies would tell you it’s still not quite there,” he said, with a few notable exceptions like Starbucks’ marketing efforts.

That's where YP Mobile Labs comes in. Its covey of PhDs will work to come up with better ways to get people to respond to ads through data-based approaches including individual-level targeting. “Mobile Labs is an effort to say how do we take this stuff and systematize it, and offer those lessons to advertisers,” he said.

Specifically, that means a marketer launching a campaign can access case studies to see what worked or didn’t in the past. What are features that drove the highest results? What type of secondary, or post-click, actions have the most engagement?

“And then once we’re running a campaign with them, having a quantitative expert to help them drive that to the best it can be,” said Petersen. How do you make it better? It's a data question…and that’s what our guys are really good at.”

By comparison, he noted that some of the agencies YP works with don’t have the kind of statisticians and machine learning experts the company has assembled at YP Mobile Labs. “We want to give advertisers more access to it as part of a feature offering of what we as YP give to marketers,” he said, without charging an extra fee.

Under CEO David Krantz, mobile has become an increasingly important focus for YP. Last year, mobile advertising made up about a third of the company’s $1 billion in digital ad revenue. The YP properties, spanning search and display advertising across online and mobile platforms, reach an audience of more than 70 million monthly U.S. visitors.

It also offers wider reach through ad partners like Yahoo, Bing, Google, AOL and Yelp. With Google and Facebook emerging as the major players in mobile advertising, many have raised questions about the future of independent mobile ad networks like Millennial Media and InMobi. That’s even more true with the launch of Facebook’s Audience Network last week.

Petersen said that one key for YP is its collection of first-party data from searches on the site. “Because we have so much consumer search traffic… figuring out ways to leverage that, and having ownership of a first-party property, is going to be a durable advantage as a lot of the third-party data is flowing everywhere,” he said.