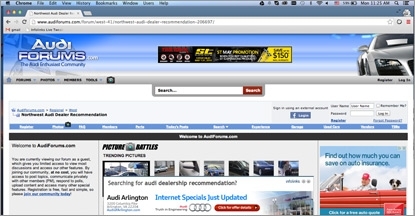 Infolinks has introduced an ad unit that gives publishers a new revenue stream. Tests demonstrate that it produces higher engagement rates for advertisers without the need to profile users. Dave Zinman, InfoLinks CEO, calls the ad non-intrusive to site visitors.

The ad unit, InFold, delivers 20 times higher engagement rates compared with traditional display, Zinman, said. "We're launching with close to a billion impressions monthly across our marketplace," he said. "Initial tests with Internet Brands saw an increase of about 2.5 times in revenue and 180% eCPMs."

The ad unit slides up from the bottom of the browser window, so it's always in view. It appears between 15 and 20 seconds and slides down to reveal just the headline. The size -- a standard 728 x 90 leaderboard ad -- supports the Interactive Advertising Bureau (IAB) standards. The ad is triggered when someone comes to a publisher site from a search engine or any other site on the Web.

The technology does not target site visitors with an ad based on what they did last week or last month. It tries to understand the task at hand and target visitors with what they're in market to buy now. Zinman said that's why engagement rates are so high. "It's based on real-time intent, not programmatic or previous intent," he said.

The keywords determine the ad that gets served on the site. A real-time ad targeting auction determines the advertisement being served based on where the visitor originates and the page they land on the site. Keywords extracted from meta-analysis triggers the ads.

Zinman said video doesn't fit well in the ad unit being used today, but the company will consider alternatives.