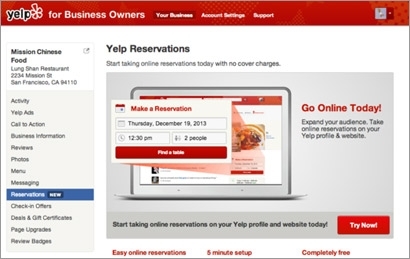 Through Yelp Reservations, first reported by TechCrunch earlier today, the ratings and reviews site will power online reservations made from a restaurant's business listing on mobile or the desktop. Businesses can also get a free widget to allow visitors to book reservations directly through their own Web sites.

On the consumer side, people will get a text message reminder after booking, as well as the option to cancel or change a reservation via text.

Yelp already offers a subscription-based reservation service through its purchase of SeatMe last year that charges restaurants $99 a month. The paid offering will continue, along with the option for people to book reservations through a partnership with Open Table.

“Yelp already offers the opportunity to book reservations through Yelp SeatMe and OpenTable, but Yelp Reservations is a great option for businesses that aren't big or busy enough yet to need the robust functionality of Yelp SeatMe,” the company stated in a blog post.

The new service marks an expansion of the company’s Platform initiative launched last year, aimed at helping it expand into local e-commerce. In that vein, Yelp last year added a food delivery service and booking of spa/salon appointments.

In a research note about Yelp Reservations based on the TechCrunch report, Macquarie Securities analyst Tom White suggested that if the offering brings more businesses to Yelp, that could benefit its advertising business.

“If Platform can succeed in attracting consumers to reserve/book/transact on Yelp profile pages, than we believe participating local merchants will come to view Yelp as a source of measurable commerce/inbound volume and will be more likely to buy Yelp advertising to drive traffic to their Yelp profile pages,” he wrote. “Platform also helps address the ROI/attribution problem for local businesses that buy advertising on Yelp.”

In the first quarter, Yelp reported revenue surged 66% from a year ago to $76.4 million. It said unique monthly visitors climbed to 132 million -- up 30% -- and local business accounts reached 74,000, representing a 65 percent gain.

Mobile use also continued to grow, with 35% of new reviews coming from mobile devices, and about 60% of all searches taking place on mobile devices. Average monthly traffic via mobile grew 52% to 61 million. The mobile growth dovetails with Yelp’s efforts to build out more transactional services, allowing people to order or make reservations on the go.

When it comes to Open Table, Macquarie’s White surmised it wouldn’t have much of an impact on the company’s reservation basis in the next year or so. To pose a bigger challenge, he said Yelp will have to have grow the number of participating restaurants and change how consumers view Yelp from a purely research tool to a booking and transactional site.

“What is tricky/difficult for YELP is that there is a bit of a "chicken and the egg" dynamic at play here: restaurants may not sign up for YELP's platform if consumers aren't booking/transacting on it, and consumers will be unlikely to book reservations if there aren't enough participating restaurants,” he wrote.

Nevertheless, Open Table’s stock price was down almost 7% in afternoon trading on news of Yelp’s introducing a new competing service.