3 Chefs 'Define The Edge' For Wusthof 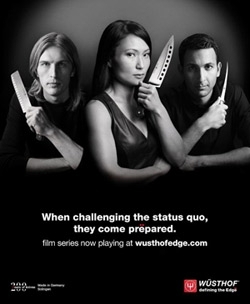 Upscale cutlery brand Wusthof is celebrating its 200th anniversary with the launch of the third phase of its "Defining The Edge" marketing initiative.

Developed by AOR AgencySacks, the campaign introduces three new chefs — the “Maverick” (Ann Kim of Pizzeria Lola in Minneapolis, Minnesota); the “Natural” (Sam Gorenstein of My Ceviche in Miami, Florida); and the “Artisan” (Clayton Chapman of The Grey Plume in Omaha, Nebraska) — that "define the edge" of their craft through passion, excellence and a strong social media presence.

"The creative for this campaign is founded on the idea of celebrating culinary professionals who, very much like our brand, are continuously raising the bar on excellence, and constantly challenging the status quo," says Annette Garaghty, vice president of sales and marketing, Wusthof-Trident of America. "We're delighted to showcase chefs who perfectly reflect our company's DNA, which is the key reason for our enduring success."

The campaign is anchored by the newly redesigned microsite, www.wusthofedge.com, where these three new chefs are introduced through documentary-style videos that reveal their values, motives, inspirations, challenges and attitudes about their culinary craft.

This chef content on the microsite will continue to expand throughout the year with instructional Web videos filmed on location with each chef showcasing recipe demonstrations using Wusthof knives. These recipe-oriented and instructional videos will be supplemented with blog postings by these chefs on various topics, including unconventional tips on cooking.

The campaign is supported with digital and print media. A digital banner ad campaign features teaser videos of the three chefs and will run across epicurean, urban lifestyle, home design and luxury lifestyle digital media, such as The Daily Meal, Saveur, Serious Eats, Chow.com, Cooking.com, Urbanspoon, EatBetterAmerica, NYTimes.com, Apartment Therapy, Design*Sponge, ElleDecor, Veranda, TownAndCountry, Esquire, and The Life of Luxury. The brand's YouTube and Vimeo channels will also feature content from the campaign.

Throughout the year, these three chefs will appear in black-and-white print ads that show them holding large and distinctively shaped WUSTHOF knives. They will appear as a group under the headline "When challenging the status quo, they come prepared" in national publications that include Bon Appetit, Lucky Peach, Elle Decor, Surface, The New York Times Sunday Magazine, WSJ Magazine and the quarterly lifestyle Four magazine.

At the same time, each of the chefs will appear in single portrait ads placed in regional magazines reflecting their home base, such as Minnesota Monthly, Miami Magazine and Omaha Magazine.

"Our breakthrough creative, combined with our expanded and highly targeted media schedule, reaches all of the brand's key demographics, including today's sophisticated youth," says Garaghty. "From the start, the campaign's objective has been to reach hyper-connected, food-centric consumers, who delight in discovering, interacting with, and sharing culinary information through posts on social media. While our culinary focus remains in place, this year we're extending our reach to savvy consumers keenly interested in high design and luxury products."

The German-based Wusthof is a family-owned company for premium-quality cutlery, knife sharpening tools and other cutlery accessories. The products are sold at select specialty and department stores in 90 countries around the world. The U.S. subsidiary, Wusthof-Trident of America is located in Norwalk, Connecticut.

This campaign runs in the U.S. Internationally, the company is promoting its 200th anniversary through a variety of promotional activities, social media outreach, print campaigns and various specialist trade activities.