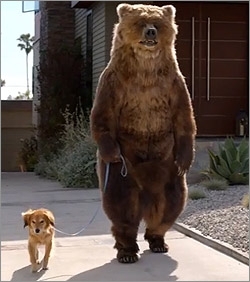 Move over, Smokey, there’s a new talking bear in California. And this one’s pushing a message of conservation.

In an effort to get Californians to be even more energy- and water-conscious as the state moves into drought season, Energy Upgrade California has brought the bear from the state’s flag to life with a message of acting environmentally responsible green.

The campaign from Lowe Campbell Ewald features the bear coming down off a flagpole to give people tips about managing their water and energy use by doing things such as installing low-flow shower heads, purchasing tankless water heaters, replacing incandescent lightbulbs with LED bulbs and using programmable thermostats. The spots end with the tagline, “Stay Golden.”

“The idea was, ‘How are you going to inspire Californians to do something they never wanted to do in the first place?’ We wanted to turn energy and water conservation into a source of pride,” Jim DiPiazza, executive creative director at Lowe Campbell Ewald’s Los Angeles office, tells Marketing Daily. “We needed a spokesman to rally around that theme, and we realized there was no one better than the bear on the state flag.”

The initiative is the state’s first branded effort to bring together energy and water providers, and state commissions, to spread the message of energy and water management. Lowe Campbell Ewald won the account last December. The effort is intended to be a statewide initiative to supplement the ones that have been undertaken by the local utility companies, DiPiazza says.

“It hasn’t been able to become a statewide initiative,” he says. “This is a way for the state to say this directly to the public.”

In addition to the television commercials, the campaign will also include out-of-home, digital, and print advertising.