The Drinkers Are There; Bars, Restaurants Seek Them 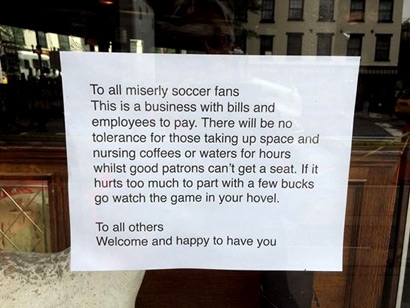 While watering establishments charge top dollar for PPV events, the World Cup is free, and people are expected to pay in drink fees. One bar, the famed White Horse Tavern in New York's West Village, sums it up pretty well in the above window posting.

Ironically, sports events are a disappointment, given the explosion in sports bars, where screens are bolted to every available service, even on beer taps. Mintel says 30% of respondents drink at home and 20% at someone else’s house while watching a sports game.

The cliches hold true. Men really do suck down the brewskies while watching sports. No Merlot in sight:). Unless, perhaps, it's tennis. Mintel says 37% of guys versus 23% of women attach drinking to sports, with beer drinkers more likely than consumers of any other alcohol type to drink while watching a sports game at home. Millennials are the most likely generation to have consumed alcohol at a pub/brewery (27%) over the past month. Only 18% of Boomers report having done that.

Midwesterners are more likely than any other region to have visited a neighborhood bar in the past month, and West Coasters, at 17% of respondents, are least likely --although the poll didn't clarify whether that included juice bars, which would have changed the equation.

As far as the World Cup is concerned, restaurants are trying to get in on the action. Mintel says there is a trend toward expanded alcoholic drink menus, extended hours, and happy hours and World Cup specials. The number of alcoholic beverages on the menu at restaurants over the past three years has grown the most within the fast casual segment (185%), followed by fine dining (27%), and quick service restaurants (21%).

“On-premise drinking tends to be a more social occasion than drinking at home. Since over half of respondents drink while doing something else and an even higher number drink with family and friends, operators can create group activities and events to encourage socialization." She said that includes things like hosting games and contests during half time, awarding prizes to get consumers involved. Or there's the tried-and-true themed food and drink pairings to match the cuisine of the countries, "Or better yet, plates and tasting flights can offer components from each country as a duel.”

And as far as the White Horse Tavern is concerned, maybe they should charge a premium for the water?