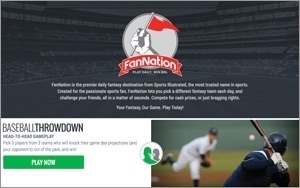 Sports Illustrated is getting into the fantasy game. The venerable sports media brand is launching a new daily fantasy gameplay platform to extend its mobile reach and grab some of the growing fantasy sports audience.

The new app, FanNation, will feature a suite of daily games devoted to the four major professional sports, encouraging fans to compete daily in short, sports-fantasy-based games against friends or random opponents.

“Up until now, Sports Illustrated has not had its own fantasy game,” Jim DeLorenzo, digital vice president and general manager of Sports Illustrated, tells Marketing Daily. “We write about them, of course. But not having [one of our own] was a hole in our offering.”

The first game in the series, Baseball Throwdown, sets up head-to-head challenges via text, email, Facebook or Twitter. Each contest is tied to the day’s scheduled professional baseball games, where fans leverage their knowledge of specific match ups to create a three-player team (pitcher, infield and outfielder) that will exceed the days’ stat projections.

“Sports fans, whether passionate or casual, want to play fantasy sports,” DeLorenzo says. “This is a different take on daily sports and daily fantasy.”

By making the gameplay short and offering daily fantasy options, FanNation (developed by TopLine Game Labs) has an opportunity to offer a different experience from other, better-established league-type games, DeLorenzo says, while capturing people in the short-burst “standing-in-line economy.”

“The switching costs are high with commissioner-led leagues,” he says. “This is more in tune with how people are using the mobile Internet.”

Getting into the fantasy sports world is important for Sports Illustrated, as it a new point of entry for the brand to a growing audience of sports enthusiasts. More than 41 million people play fantasy sports games in the U.S. and Canada, according to the Fantasy Sports Trade Association.

“We set out to expand the concept of Sports Illustrated digital from a website to a platform,” DeLorenzo says. “We’re trying to make sure we’re providing sports fans the right products and services across all platforms.”