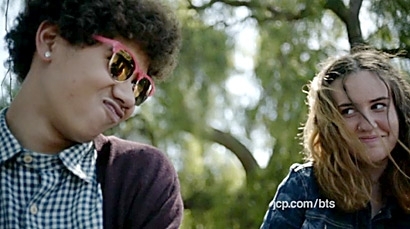 It may seem like summer just got here, but for the nation’s largest retailers, the fierce fight for back-to-school bucks is already on. JCPenney has announced a new marketing campaign, aimed at sparking the self-expression in teenagers’ wardrobes. Macy’s, too, is beating the drum for its apparel, including a fashion link with Teen Vogue. And Sears has just announced its new Seventeen Magazine clothing line, rolling out in stores and online.

JCPenney's new campaign includes two new spots, as well as an effort aimed at the Hispanic market. It also includes an “Express Yourselfie” digital campaign, where young shoppers can create a personalized emoji, complete with accessories and hairstyles, and then post the emoji side-by-side with a selfie.
Back-to-school efforts at Macy’s focus on big sales, with emphasis on this season’s intensely promotional prices, as well as special events that focus on the year’s trendiest looks. (Expect lots of blue, ‘90s grunge, leather, skulls, re-colored tartan plaids and something called a “coatigan.”)

The Cincinnati-based retailer says it has designated Aug. 9 for its Teen Vogue Back-to-School Saturday, a one-day shopping extravaganza with additional markdowns of up to 20%. (A spokesperson for the magazine says the event, started back in 2012, also includes such retail brands as Abercrombie & Fitch, Aeropostale, H&M, and Staples, as well as Maybelline and Garnier, are scheduled for 130 malls, with fashion presentations, musical performances and editor appearances.

And while Sears may be struggling mightily, it’s hoping teens and tweens won’t notice, and has come up with a fashion magazine connection of its own: The company has just announced an exclusive fashion collection with Hearst’s Seventeen Magazine. The 83-piece line includes printed leggings, denim vests, military jackets, boho dresses, cardigans and blouses, as well as accessories, handbags, jewelry and footwear. Each item is priced under $50.

To hype the launch, the retailer is using the hashtag #17Style across its social media platforms. Sears says it will offer 10 specialty shops featuring Seventeen signage, charging stations and interactive elements such as digital magazine content and social feeds in its stores. The company says it is the magazine’s first apparel and accessories collection since its founding 70 years ago.