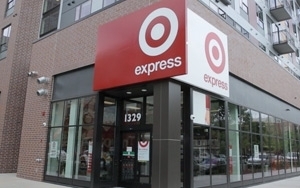 the wraps off its first TargetExpress, a small concept it hopes will be a big hit with Gen Y.

At just 15% of the size of its typical store, the company says it hopes the merchandise sold in the Dinkytown test site — heavy on beauty, electronics and convenience food — will appeal to nearby University of Minnesota students, as well as urban shoppers.

“This is an exciting opportunity to test and learn as we continue exploring new ways to meet our guests’ needs and exceed their expectations,” says John Griffith, EVP of property development, in the release explaining the test. “Our focus is on ensuring the Target shopping experience is available when, where and how guests want it.”

While much of the criticism of the Minneapolis-based retailer has focused on the ongoing fallout from its vast data breach last Christmas, its growth problems are much bigger. Thanks to increased competition and its fast-fading fashion swagger, traffic has declined for six consecutive quarters. Its e-commerce strategy has also come under fire, and TargetExpress encourages several new digital shopping enhancements. Those include in-store pickup and a test app called In a Snap, which allows shoppers to scan photos of promotional merchandise from end caps, to speed checkout.

The concept was developed from research which found that for in-a-hurry shoppers, “there are often a number of pain points, including long lines, navigation challenges and uninspiring offerings — all of which Target is hoping to conquer with its latest store format test,” Griffith adds.

Plans call for four more test stores in 2015, including three in San Francisco and one in St. Paul.

“The prototype feels like a drugstore along the lines of a CVS or Walgreens, but has its own Target flair with merchandise that includes groceries, bedding, smartphones — plus a healthy dose of Gophers fan gear,” writes reporter Kavita Kumar in the Minneapolis Star Tribune. “Aside from basic socks and underwear, it doesn’t have an apparel section. Nor does it have furniture or patio sets. But it does have a full-size beauty department, along with the retailer’s fairly new beauty concierge service.”

Rival Walmart has also stepped up its expansion of its smaller-format stores, called Walmart Express and Neighborhood Market. Early this year, it announced it was doubling the number of small store openings, hoping to build as many as 300 this year.