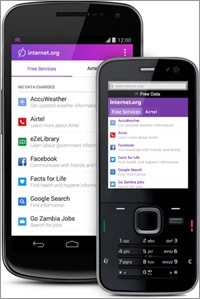 In its quest to make Internet access available to everyone, Facebook has launched a new app that provides free basic Internet services to people in emerging markets.

The new Internet.org app will be introduced initially in Zambia through a partnership with Airtel before being rolled out to other parts of the world. Named after the project Facebook started earlier this year to connect the two-thirds of the world not online, the app will offer free access to services including AccuWeather, Google Search, Wikipedi, and Facebook.

“With this app, people can browse a set of useful health, employment and local information services without data charges. By providing free basic services via the app, we hope to bring more people online and help them discover valuable services they might not have otherwise,” stated Guy Rosen, product management director at Internet.org, in a blog post Thursday.

In a separate post on his own Facebook page, company CEO Mark Zuckerberg said only 15% of people in Zambia have Internet access. “Soon, everyone will be able to use the Internet for free to find jobs, get help with reproductive health and other aspects of health, and use tools like Facebook to stay connected with the people they love,” he wrote.

He added that in the last year, Internet.org had helped 3 million people get Internet access for the first time. Other partners in the nonprofit organization include Ericsson, MediaTek, Nokia and Samsung.

Facebook in June acquired Pryte, a Finnish start-up that makes it easier for people in emerging markets to access mobile applications inexpensively. The social network has also begun building drones and satellites that are intended to beam down Internet access to remote parts of the world.

The Internet.org app would help Facebook provide connectivity to the 85% of the world’s population that lives in areas with cellular coverage -- but it says only 30% have Internet access. Through agreement with carriers in developing regions, the company already lets people use the Facebook app without paying data charges.