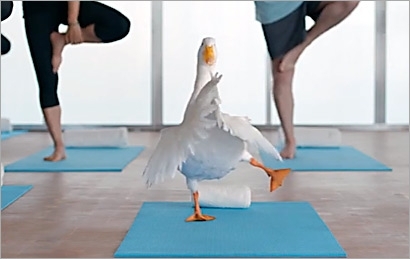 Aflac’s mascot duck continues to put his feathers on the line to demonstrate how the insurance company goes above and beyond for its customers in a TV spot breaking Tuesday night during a Country Music Association special.

“Duck Does Yoga,” which launched on YouTube Tuesday morning, breaks during the CMA Music Festival at 8 p.m. EDT on ABC.

The commercial continues the insurance company’s campaign of contrasting activities that the Duck doesn't perform well to how quickly the company pays claims -- often in just four days. In the latest installment, the lively Duck finds himself quite out of place in a serene yoga studio.

“The Aflac Duck is a very lively, active duck, so we wanted to take him to a scene that active women could relate to and enjoy, which led us to the Yoga studio,” Zuna tells Marketing Daily. “We felt the Yoga studio concept was especially entertaining when you contrast the Duck’s loud personality with such a traditionally calm environment.”

The Duck has recently been seen misstepping on the golf course and in the workshop with HGTV celebrity Scott McGillivray. His self-deprecation will continue this fall.

“I can tell you that the Aflac Duck will continue his active lifestyle this fall, but you may see him in a more male-centric arena,” Zuna says. “The Aflac Duck isn’t afraid to try new things and loves working with our partners, like the Heisman Trophy, to both entertain and tell consumers about the benefits of having supplemental insurance.”

The “Duck Does Yoga” commercial will air on a variety of media networks throughout the fall television season. The integrated campaign also will include digital ads, public relations outreach and social media elements on the Aflac Duck’s Facebook, Twitter, Instagram and YouTube pages.