Yo, Muthafather, Get The Swagger Wagon 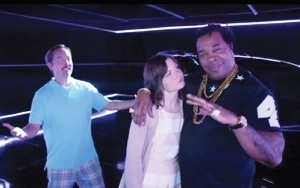 Toyota's "Swagger Wagon" is back. On the heels of the automaker's social media influencer campaign for the new Sienna minivan where a trio of creative parents made videos touting the vehicle, the Torrance, Calif.-based Toyota U.S. sales division has brought back the bland-suburban-white-people-rap social sensation. The first iteration -- a black-and-white music video with a couple of parents rapping around the Sienna -- was a viral hit, having garnered over 12 million views since it launched in 2010.

The just-launched redux for the 2015 model includes the kids too, and introduces bona fide rapper Busta' Rhymes. Kibo Kitahama, Toyota Motor Sales' national marketing and communications manager for van and crossover utilities, says the effort -- which went live on Friday -- has garnered over a quarter million views thus far. The song and lyrics were created by Toyota's agency Saatchi & Saatchi L.A., music company Walker, and Rhymes himself.

Says John Payne, creative director at Saatchi L.A.: "A copywriter at Saatchi wrote the lyrics with Walker helping out. Busta wrote his own verses and I"m happy to say that we didn't make any changes at all to what he did."

Rather than describe the video, it's best to have you watch it. But it's worth mentioning that it gets more into specific product virtues than the last one did. At one meta-moment, the parents come out of rapper persona to talk about the satellite radio functionality.

Payne tells Marketing Daily that Rhymes was an obvious choice because he's around the age of the parents Toyota is pitching, and it wasn't terribly hard to get him on board. "It took a couple of phone calls. One key was having a conversation with him and his agent and assuring them that we were not going to ask him to do anything out of character," he says. "It was important that he keep his style and let his personality come through. We didn't want to change him."

Kitahama says the audience will connect with the creative because it grew up with MTV and VH1. "We needed to get someone who resonated with our consumer." He says the campaign will be entirely social, with content on YouTube, and links on Instagram, Twitter and Facebook all directing to the video.

The 2015 Sienna campaign launched July 17 with a virtual reveal via the social-influencer made videos, which play on the unexpected moments and adventures of parenthood. In the real world, the minivan was unveiled at Artscape2014 in Baltimore, the largest free art festival in the U.S., per Kitahama. "And last weekend we showed it at Lollapalooza [in Chicago]," he says. The concert has a Toyota-sponsored area called Kids of 'Palooza. "We had activation planned with Lollapalooza and we jumped on that opportunity. Lollapalooza has been around for a while, and people who love it are now young parents — Gen X and Gen Y — but we have some Boomers, but we don't feel that we are alienating them."

The minivan segment has been flat and stable for some years, even with the post-recession recovery of the overall market with record sales in categories like crossovers. But Kitahama says the pure-digital (and therefore less pricey) media focus for the campaign has less to do with the lackluster fundamentals of a shrinking market with the media behavior of young parents. "The thing we considered is not whether the minivan segment is growing or shrinking, it's where are the consumers? They are very busy, dropping kids off to play soccer, do ice skating, birthday parties, etc. The way they get information is through social. Rarely do you have a chance to watch TV. So we thought we would go straight to where they are."