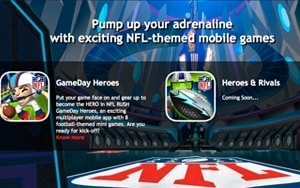 With only days to go until the start of the season, the NFL is looking to entertain some of its youngest fans through a medium they’re familiar with: gaming.

The NFL and educational game maker JumpStart (which recently worked with DreamWorks Animation on a “How to Train Your Dragon” tie-in) have entered a partnership through which the companies will build and release NFL-themed digital offerings for kids, including management of the league’s already existing youth gaming platform, NFL Rush Zone.

“They’re making youths an important part of their business, [and] we’re building a multiplatform strategy,” David Lord, CEO of JumpStart, tells Marketing Daily. “Today they have some simple Flash[-based] games. We’re building big worlds. What you’ll see next year will be very different than what they have today.”

The first two games — GameDay Heroes and Heroes & Rivals — will launch in conjunction with the upcoming season, available via mobile apps, Web browsers and social media. Lord describes the games as “Friday night game night meets the NFL experience,” in which children and other family members challenge each other to football-based contests in their living rooms while watching NFL games on Sundays.

"We are excited to work with JumpStart to help bring our youngest fans closer to the game they love and introduce our game to new fans," said Mark Waller, NFL executive vice president and chief marketing officer, in a statement. “Working with JumpStart will allow us to go deeper and provide more ways for families to connect around football every day and night of the week."

As the platform develops, JumpStart will be adding more educational components to the games that include math and simple algebraic equations. Once completed, about half of the online experience will be geared toward local NFL team affinity and fan content, and half will be “grade-based” curriculum content, Lord says.

“What [the NFL is] looking for is team engagement and affinity, and we’re providing an innovative way to build that affinity,” Lord says.