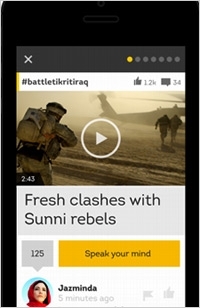 Al Jazeera Media Network on Monday rolled out an app version of the AJ+ online video network that it soft-launched in June on YouTube.

Geared to a millennial audience, the new app for iOS and Android devices will emphasize social sharing and three types of programming, including “bite-size” news packages, long-form features and stories focusing on accounts of “human achievement and inspiration.”

In addition, the AJ+ app will offer pieces of content, or “cards,” organized into “stacks” representing different topics. Cards might feature a video, quiz, factoid, or art and are designed for sharing on Facebook and Twitter. Other elements, like “Word of the Week,” where the network takes a look at terms that are generating lots of buzz during a given week, will be ported over from the AJ+ YouTube channel.

Along with the brand’s presence on Facebook and Twitter, the YouTube channel has drawn 8 million views to date, according to Al Jazeera. Most of the videos are two minutes or under and produced with MTV News-style editing, graphics, and young hosts. Like its parent network, the focus is on international news and the Arab-Israeli conflict, but packaged for the social media age.

The new app aims to do the same in mobile, the medium in which millennials spend most of their time. “AJ+ gives Al Jazeera the flexibility to experiment, innovate, grow as an organization and adjust quickly in an era of rapid change in the news industry, said Yaser Bishr, Al Jazeera’s executive director of strategy and development, in announcing the new app.

One thing the AJ+ app won’t include is advertising. “I strongly believe that advertising banners disrupt the user experience. As for our business model, AJ+ is part of the Al Jazeera Media Network. Similar to the BBC model, AJ+ is a corporate entity that receives funding from the state of Qatar,” said Bishr  in an interview, noting legal measures put in place separating the government from Al Jazeera editorial content.

Al Jazeera already offers several companion apps for its broadcasts including Al Jazeera English and Al Jazeera America News. It is promoting the new Aj+ offering through video and display ads on its video network.