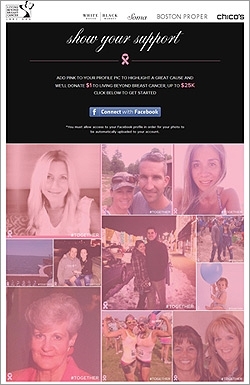 For every individual who uploads the charity image to his or her Facebook profile photo, White House Black Market will donate $1 to Living Beyond Breast Cancer. They'll also donate an additional $1 for every share via Facebook, Twitter and email, all collectively working together in an effort to raise $25,000 through the multichannel campaign.

The effort is promoted via the hashtag #Together and every consumer who uploads a photo on Facebook will have the option of treating it with pink coloring.

Chico FAS' has a strong social-media footprint and this campaign is designed to use the strength of this loyal and growing customer base. Both Chico’s and White House have had some of the highest growth rates among retail branded Facebook fans and now both have more than 1 million Facebook friends.

"While we recommend that all programs include a social component, it's especially important for charitable campaigns," says Jen Grey, vice president creative services, HelloWorld. "The nature of social media lends itself to causes that are aligned with emotional topics such as children, animals, and health. People like to share causes they care about."

Although HelloWorld developed one comprehensive campaign across Chico's multiple brands, Grey says there is no firm template when working with retailers with multiple companies. "In the case of Chico's FAS, consumers may not realize that Chico's owns Soma Intimates, Boston Proper or White House Black Market, so one unified campaign can help drive awareness," says Grey.

"However, if brands have insight on where their audience preferences vary across brands, it makes sense to align specific charitable initiatives to those that will drive the best response. It can be effective either way."