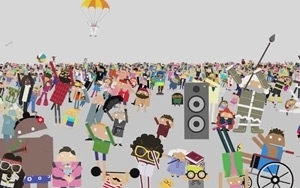 Google has launched three new Android ads using the slogan "Be together. Not the same" to foster individualism. The ads encourage people to be themselves, and learn to work with others. The message appears at the end of each 30-second spot. Animated characters help deliver the playful message of Android for everyone -- to remain individualists.

The spots also encourage personalization. Going with the Android operating system allows consumers to choose from a variety of handset makers like Samsung, LG, and others -- all running on Android. The text in one of the ads, "All kinds of phones for all kinds of folks," makes it clear. Two of the online video spots found on YouTube focus on music.

Some might wonder why the animated characters waiting at the bus stop in the first 30-second spot pull a phone out of their pocket rather than look at their wrist when an Android ringtone plays. Each character checks their pocket to see if their phone is ringing. The smallest character takes the phone from his pocket and a giant device appears with Android L running on screen.

Mahaney highlights paid clicks, cost per click and traffic acquisition cost as metrics in a report published Tuesday. In Q2, paid clicks grew 25% year-on-year, but he believes that in Q3 Google will likely report a sequential slide to roughly 20% Y/Y. The report describes deterioration in CPCs by 3% in Q3, compared with 5% in Q2.

Google's challenges in 2015 will not necessarily come from obvious competitors.

A speech Google chairman Eric Schmidt delivered in Berlin points to Amazon as the company's biggest rival. He said many people think of Bing and Yahoo as Google's main competitors, but consumers looking to shop often go to Amazon, per the BBC.

Ironically, at the MediaPost Search Insider Summit in Park City, Utah, CRT Capital Group Neil Doshi will lead a panel discussion on Amazon as the next search advertising network.