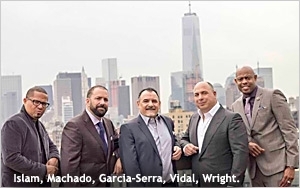 A new marketing communications holding company has been established in New York that’s being billed as the first industry holding company wholly-owned by minorities--accomplished through the merger of three existing ad agencies, a PR firm and their subsidiaries.

The merged ad agencies include Commonground, based in Chicago; MGSCOMM based in Miami; and the Vidal Partnership, based in New York. Also merging is the PR agency The Cunningham Group, based in Miami. Four subsidiaries of MGS and Commonground— CG Works, Post Master, Run Wild Productions and SWAY Public Relations —will continue operating as separate brands within the new holding company.

While the new company is minority owned and most of its units have succeeded as multicultural firms, it is pursuing general market business opportunities. The principals believe that given changing U.S. demographics—which are getting younger and more ethnically diverse--along with marketers that are increasingly adapting less siloed strategies, that they can compete and thrive positioned in the mainstream marketplace.

“We all realize successfully connecting with diverse audiences and the ability to provide cohesive total market solutions is more than a ’nice to do’ - it has become a critical component of any successful organization’s strategic imperatives,” said Islam. “Our vision is to create a unique company that lives at the intersection where culture, content, technology and creativity meet.”

“While many companies are well intentioned, they need a partner and guiding light when it comes to understanding the importance and impact of culture and diversity to the bottom-line,” added Machado.  “Moreover, with millennials being the most diverse, evasive and critical consumer group – understanding cultural context is a must. We believe Commonground/MGS provides solutions to these challenges.”

“At the end of the day, we are all entrepreneurs who have seen steady growth in arguably some of the most tumultuous times the industry has seen, because we aren’t afraid to evolve,” said Wright. “When we look to where the opportunities for growth are, our business model is in stride with what’s happening today and what’s coming tomorrow for both clients and talent.”

Merging the founding companies was described by the partners as “phase one” of their strategy. The company is now looking for additional agencies to acquire. “We will seek to acquire companies and talent driven by an entrepreneurial spirit that, like us, want to dominate this new consumer space,” added Garcia-Serra.