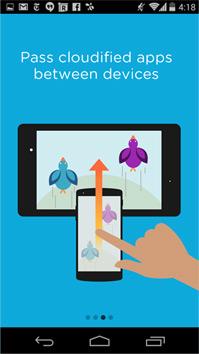 A company called NextBit -- comprised of former Google, Apple, Dropbox, HTC, and Amazon thinkers -- believe they have built technology that allows users to start one action on a smartphone, a tablet or a laptop and transfer it to finish on another device.

The system-level service, called Baton, runs in the background on Android devices. The software is designed to back up and sync all of a person's apps and data, making it effortless to switch between devices and ensure against losing data. The platform is in private beta.

Tom Moss, Nexbit CEO, explains how the company wants to focus on building a future that puts emphasis on the experiences rather than the device.

The platform offers sync to keep apps and data consistent across devices as well as Pass to send any open app as is to another. It also saves time and eliminates the process of manually finding and opening apps on different devices. Backup and Restore save apps and data to the Nextbit profile in the cloud.

Nextbit touts that it all works without app developers having to do anything. It does not merely transfer data from one app to another, but syncs all the app data across the entire device.

Nextbit, founded by former Google executives Tom Moss and Mike Chan, raised $18 million in Series A funding from Accel Partners and Google Ventures to develop technology that allows for deeper integration between the cloud and mobile devices.