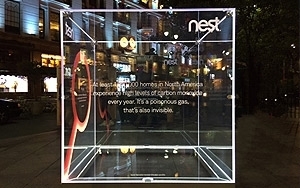 While U.S. mandates installation of carbon monoxide detectors, 11 states have still not passed this as a requirement. The company said it wants to bring awareness to ways to protect families from the invisible gas that takes hundreds of lives annually.

The clear acrylic cube, weighing 1600 lbs., allows visitors to Herald Square see what it would look like if people could see the carbon monoxide gasses. Nest was custom built and designed in Portland, Oregon, by the Nest Creative Studio, then shipped in six pieces to New York City.

The Cube is battery-operated to enable interactivity between people and Nest Protect -- the Smoke and CO alarm -- and will operate with lights and warnings as it would in a home when carbon monoxide is detected.

Google acquired Nest Labs for $3.2 billion in January. Earlier this month, Nest bought Revolv, a start-up based in Boulder, Colo., that built a hub to network device for smart gadgets that connect everything in the home like lights, speakers, locks and more. The company was known to have the ability to connect devices from multiple manufacturers like Nest, Philips, Belkin, and Honeywell.

Revolv will fold into Nest. Terms of the deal were not disclosed.