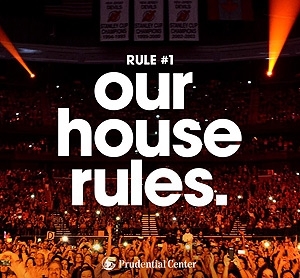 In March, Prudential Center Executives tasked agency kirshenbaum bond senecal + partners with helping it craft a strong brand identity. This presented both a challenge and an opportunity.

On one hand, it provided the agency with a blank slate. Yet the final result for the entertainment venue in Newark, New Jersey needed to make a big impact with 2 million visitors walking through its doors each year.

And the agency believes its “Our House Rules” concept has the needed punch.

"From the onset, Prudential Center's CEO Scott O'Neill and President Hugh Weber were very passionate and clear that they wanted to create a place that New Jersey could call their own," says Jon Goldberg, executive creative director at kbs. "It wasn't as much a rebranding as it was giving Prudential Center an identity and one that fans would could have ownership of and take pride in.

We weren't fixated on the past; we treated Prudential Center as if it was a new arena in New Jersey, and built off that excitement."

Thus, the “Our House Rules” concept is designed simply to give the fans – whether it be Devils fans, Taylor Swift fans or Sesame Street fans – a feeling of ownership, comfort and pride. "We played off of the idea of home and rules, and applied that concept to the arena," says Goldberg. "Most of the best stadiums and arenas have things that are only theirs and specific to the team, the place, the city, etc. We wanted to create that at the Prudential Center."

Still, the rebrand carries two meanings, first by touting how the Prudential Center "rules," while also providing fans an informative list of "house rules" to follow for those who visit. As such, the rules include No. 6 - "Find your way: No matter how you get here, you belong here;" No. 8 - "Get Loud;" and No. 23 - "Be neighborly: Everyone is a local in our seats."

"It felt right for New Jersey in terms of the double meaning of rules," says Goldberg. "So while we are saying "these are our house rules" (so as a fan, you can be comfortable and feel at home), we are simultaneously declaring "our house rules" (it's the best)!"

This rebrand will receive significant placement in and around the Prudential Center, including signs, posters, billboards and transit ads. There will also be rules tailored for locations around the arena; for instance, drink cups at concessions stands read, “Stay half full,” and napkins reading, “Keep it clean" along with Web ads, content on the Prudential Center site and a public relations effort backed by both Prudential Center and kbs, which is owned by MDC Partners.

"This is another great thing about the campaign – the rules are infinite," says Goldberg "We can keep adding. Yes, the idea of having an infinite number of rules is significant because it shows the longevity of the campaign."

A video highlighting the rebrand is available here.